No need to watch Celeb Big Brother; Digital Spy are all over it

Want to know who just coughed in the Big Brother house? Why wait for Channel 5's nightly airing of the show when Digital Spy gives you up-to-the-minute updates on literally everything.

I've been meaning to write something about the new series of Celebrity Big Brother since it launched last week but I thought I'd wait until there was something worth reporting. It has taken me a long time to realise the fundamental flaw in that plan.

While keeping an eye on Celeb BB news, however, it occurs to me that Digital Spy has taken the complete opposite approach to covering the show, by littering its pages with every nap, hiccup and dump that occurs in the house. That's fine. Whatevs. Both methods of reporting are perfectly valid. But it does seem like their way takes an awful lot more effort.

Check out this snapshot of BB news reported over the past two days: 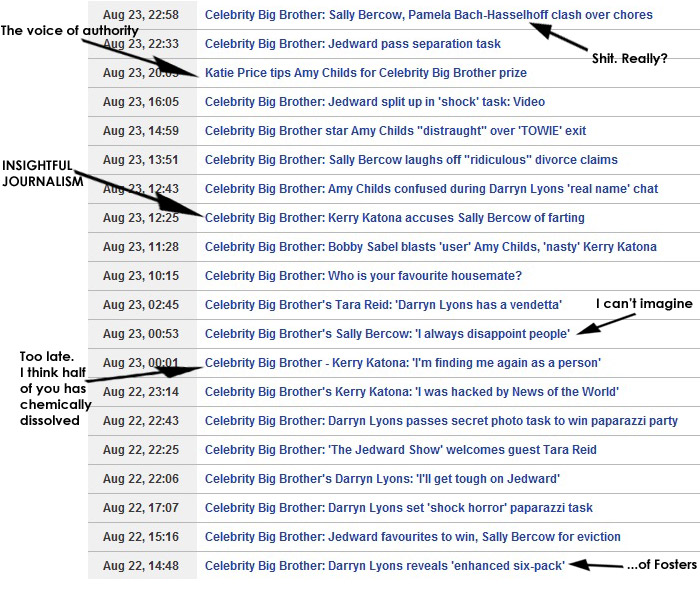 Sticking 10 people in a room and leaving them to their own devices was never going to be a big draw for high-octane adventure, so why report on every cup of tea, every suntan lotion lather and every magazine page-turn?

To be fair, Digital Spy is an aces source of all things 'entertainment news', and they perhaps shouldn't be completely ridiculed for this onslaught of mundaneness. Celebrity Big Brother is their C-major scale when it comes to trashy TV news and it no doubt gets lapped up in the same way as when SlashFilm reports on every non-news item in the world of comic-book movies.

Still, they should learn something from my favourite part of Big Brother: when they cut out the volume on the mics and all you can hear is the chirruping of crickets in the bushes, because, guess what, NOTHING IS FUCKING HAPPENING.

So there we go. I'll keep allowing the gush of inane news items to flood the internet's top TV sites and try to lift out anything important, which is perhaps asking for too much with this bunch of hepatitis C-list stars. In the meantime, can someone please top up Tara Reid's drug levels before her head just rolls off her shoulders? 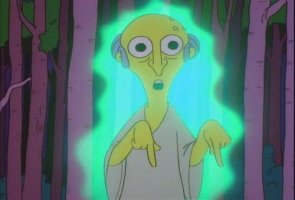 Tara, yesterday
More:  Celebrity Big Brother  Big Brother  Channel 5
Follow us on Twitter @The_Shiznit for more fun features, film reviews and occasional commentary on what the best type of crisps are.
We are using Patreon to cover our hosting fees. So please consider chucking a few digital pennies our way by clicking on this link. Thanks!