There are two Cleopatra movies coming atcha. One will star Angelina Jolie. The other is a 3D musical from Steven Soderbergh. Make sure you get in the right queue.

That Angelina Jolie is a wily one all right. One minute she's flashing her arse in Wanted and making "Bourne with tits" movies like Salt; the next she's signing on to a film about a timber empire during the Great Depression. As fun as it would be within the parameters of a loving relationship, you just can't pin her down.

But here's some news I can really get behind; a film that possibly represents a chance for Jolie to tick the boxes marked 'Sex bomb' and 'Give me Oscars'. Producer Scott Rubin has picked up the rights to Cleopatra: A Life, a biography by author Stacy Schiff, and claims to be developing a movie with Jolie exclusively in mind for the title role. Clearly, Jolie + Ass milk = box-office boners.

Jolie is a no-brainer for the so-called 'Most Beautiful Woman in History' (as voted for by the readers of Ye Olde FHM). Usually, when movies cast a beautiful siren, they never quite get it right; think Diane Kruger as Helen of Troy (*shrugs*) and Gemma Arterton in Prince Of Persia - the scene where she drops her hood to the gasps of the surrounding soldiers was met with laughter in the screening I was in. 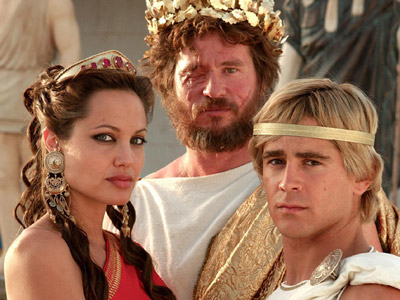 
USA Today are claiming that Brad Pitt is a "no-brainer" for Marc Anthony, which makes a lot of sense. Lots of people get offended when movies are cast with real-life couples (how dare they be in love off-screen without my consent!) but not all real-life couples are Brad Pitt and Angelina Jolie. Thinking of how attractive and successful their kids will be when they grow up makes me want to weep. There's no point having kids of my own, not any more.

In other non-girl-band Cleopatra related news, Steven Soderbergh's take on the Egyptian sexpot has fallen off the rails, presumably because whichever Hollywood executive green-lit a 3D musical called Cleo! woke up, dusted the cocaine of the screenplay he'd bought and realised the full horrors of what he'd done.

More:  Cleopatra  Angelina Jolie
Follow us on Twitter @The_Shiznit for more fun features, film reviews and occasional commentary on what the best type of crisps are.
We are using Patreon to cover our hosting fees. So please consider chucking a few digital pennies our way by clicking on this link. Thanks!