Director Adam McKay has revealed that Paramount wouldn't go for a sequel to Anchorman, even after he cut the budget substantially. The Magic 8-Ball wants what it wants.

Sad news for fans of Ron Burgundy - which is everyone, isn't it? - as director Adam McKay has revealed on Twitter that his pitch for Anchorman 2 was turned down by studio Paramount, due to financial reasons.

"
"
"So bummed. Paramount basically passed on Anchorman 2. Even after we cut our budget down. We tried."
Naturally, when Paramount got wind that some people actually wanted to see a sequel to Anchorman, which launched the careers of Will Ferrell, Paul Rudd and Steve Carell among others, they realised the most sensible course of action was to make sure it was never made.

This, remember, is the studio who just greenlit a movie based on the Magic 8-Ball - a glorified set of dice for indecisive, sticky-handed idiot children.

It doesn't make a lick of sense. Anchorman cost next to nothing to make, yet exploded on DVD and has become one of the most widely quoted comedies ever made. Milk was a bad choice. I wanna be on you. I love lamp. Like retarded weatherman Brick, Anchorman 2 was a no-brainer.

Of course, there's no cast-iron guarantee that a sequel could have captured the same magic a second time around, but surely it has more of a cache with modern moviegoers than a fucking paperweight toy? I just hope the asshat executive who turned down this movie had to look straight into the big sad eyes you see below when he broke the news. 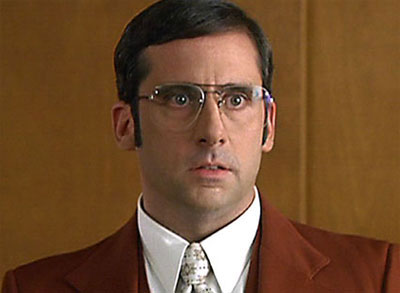 So the pants party is cancelled?
More:  Anchorman 2  Adam McKay  Will Ferrell  Idiots
Follow us on Twitter @The_Shiznit for more fun features, film reviews and occasional commentary on what the best type of crisps are.
We are using Patreon to cover our hosting fees. So please consider chucking a few digital pennies our way by clicking on this link. Thanks!