The Pirates Of The Caribbean series is set to go on a CRUZ with news that sexy Spanish siren Penelope Cruz will join the cast! CRUZ that girl? It's Penelope Cruz! Time to go on CRUZ control! Hahaha! Right guys?

With Keira Knightley jumping ship and Orlando Bloom sucking balls, the Pirates Of The Caribbean series is looking a little light on salty sea-dogs these days. Bolstering the cast will be new addition Penelope Cruz, who reports say will play a 'feisty foreign character'. Reports I wrote just now.

This is a bit of a no-brainer when you remember the director of Pirates 4 - codenamed On Stranger Tides - is one Rob Marshall, official friend of Hollywood females and the man behind mega-flop musical Nine.

To celebrate this momentus news, here is an awesome picture of Penelope Cruz being buried in sand by a dog. What up. 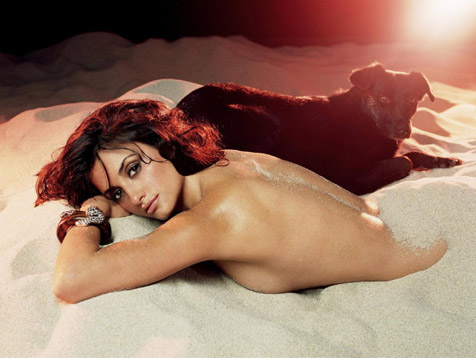 More:  Pirates Of The Caribbean  Penelope Cruz  Rob Marshall
Follow us on Twitter @The_Shiznit for more fun features, film reviews and occasional commentary on what the best type of crisps are.
We are using Patreon to cover our hosting fees. So please consider chucking a few digital pennies our way by clicking on this link. Thanks!