They're the animation house that "doesn't do sequels", but following shortly after Toy Story 3 and Cars 2, Pixar will release Monsters Inc 2.

As a red-blooded male whose interests include sport, fighting and driving real fast round in a circle, it pains me to admit that I love Pixar movies. They kind of have a profound effect on me: when I'm watching one, I flash-forward to me watching it with my kids, and them loving it as much as I do. Also, the sky has been scorched and giant robots are trying to kill humanity, but that's beside the point.

As a member of the 'gay for Pixar' club, I'll immediately forgive all flaws found in any of their movies, or any of their suspect ideologies (was WALL-E a date rapist? Yes he was.). And so, when it comes to them announcing sequels to their popular movies, despite them saying that they'd never do such a thing, I'll happily look the other way and whistle innocuously. It's a suspiciously 'Disney' move, but one I can let slide, because of the following, simple reason: I love Monsters Inc.

Monsters Inc 2 will be released on November 16th, 2012, so, you know, keep the date free and everything. There are no details about story yet, but original director Pete Docter will not return, so it looks like Pixar will promote from within as they are prone to do.

You can guarantee Mike, Sully and Boo will all return for duty - some are even speculating that it's a grown-up Boo you can see in the new trailer for Toy Story 3. Nice work, nerds. 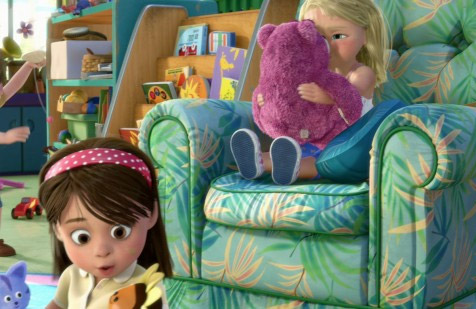 Picture courtesy of Slashfilm.com
More:  Pixar  Monsters Inc 2
Follow us on Twitter @The_Shiznit for more fun features, film reviews and occasional commentary on what the best type of crisps are.
We are using Patreon to cover our hosting fees. So please consider chucking a few digital pennies our way by clicking on this link. Thanks!