Prepare ALL the awards: The Counselor is coming

Move over, Despicable Me 2 3D - I have a new favourite film of 2013. Michael Fassbender officially joins Ridley Scott and Cormac McCarthy's The Counselor: time to board the BADASS MOTHERFUCKER express.


It's rare in film that you get a holy trinity of awesome: three separate parties all coming together as one. The best you can usually hope for is a great actor working for a terrific director, or that terrific director adapting a stellar writer's work. But all three? Outstanding actors, writers and directors all coming together for the first time for one standalone project? It almost never happens. I'm struggling to think of examples, which either means a) I'm bang right, or b) I'm too stupid to think of any.

Well, now there's The Counselor. This thing might as well have the tagline 'For Your Consideration'. Here's a Venn diagram to try and explain why The Counselor is so special. 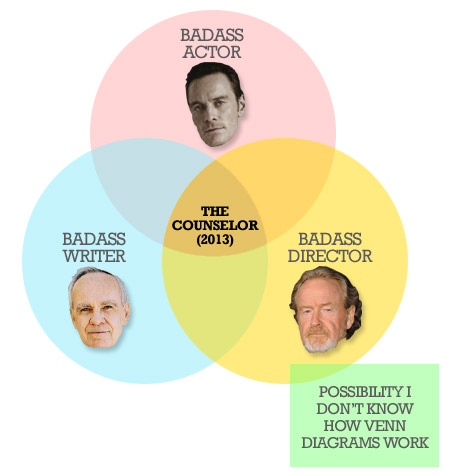 See? Science! For the unintiated, The Counselor is Cormac McCarthy's first stab at writing directly for film. McCarthy is the grizzled old Rhode Island writer who overcame his adversity to punctuation to write some of the greatest American novels of recent years, including but not limited to Blood Meridian, No Country For Old Men and - oh yeah - The Road: one of the most amazing books ever written. I should know, I've read six.

McCarthy's prose is occasionally unforgiving in print, but the news he was writing a screenplay was exciting enough before Ridley Scott showed an interest to direct. We found out earlier this month that Scott was locked in to direct The Counselor - a tale of a lawyer sucked into a drug deal, described as "No Country For Old Men on steroids", whatever that means - but now Michael Fassbender has committed to the lead role.

Can I get a hell YES.

I predict that The Counselor will be the most decorated of all movies released in 2013, with the possible exception of Paul Thomas Anderson's Scientology parable The Master, and maybe Iron Man 3.

More:  The Counsellor  Cormac McCarthy  Ridley Scott  Michael Fassbender
Follow us on Twitter @The_Shiznit for more fun features, film reviews and occasional commentary on what the best type of crisps are.
We are using Patreon to cover our hosting fees. So please consider chucking a few digital pennies our way by clicking on this link. Thanks!