Internet fuss suggests that Rachel McAdams, who it turns out is incredibly hot when blonde*, is up for the role of Black Cat in Spider-Man 4. That's it. That's the entire story. Read on if you're bored. I am. 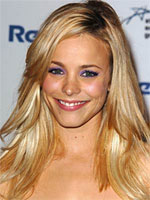 Net speculation on upcoming movies in production usually means one thing - a throwaway sentence that's near impossible to expand upon, that also probably isn't true. Let's try and break the trend. (*strains*)

I don't know how rumours like this start, but the web is buzzing with news that Rachel McAdams (she of Sherlock Holmes and The Time Traveler's Wife fame) is up for the role of Felicia Hardy in Spider-Man 4.

Hardy, who operates under cover of darkness as Black Cat, is one of Spider-Man's slinkiest foes in Marvel mythology. The character's inclusion would certainly take the heat off Kirsten Dunst's plain Mary-Jane, who's about as sexy as waking up with your pants on backwards.

Those very same rumours - or maybe they're different rumours, who can tell? - also put Atonement's Romola Garai in the frame for the same part. Unfortunately Garai is put at an instant disadvantage by virtue of the fact I don't know how to pronounce her name. Advantage: McAdams.

* What can I say? I have a thing for Mean Girls.
More:  Spider-Man 4  Rachel McAdams
Follow us on Twitter @The_Shiznit for more fun features, film reviews and occasional commentary on what the best type of crisps are.
We are using Patreon to cover our hosting fees. So please consider chucking a few digital pennies our way by clicking on this link. Thanks!