Riddle me this: is Joseph Gordon-Levitt Batman's new foe?

They should just go ahead and call the new movie Batman Speculation.

As the world is currently in the grip of Inception hysteria, it's hard to remain objective about a Christopher Nolan story - particularly one involving Batman - but I'll try my best not to get too excited. 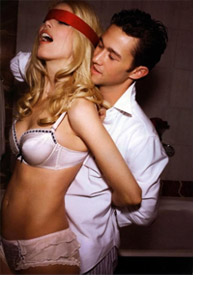 At least, that's the line that's being towed by FirstShowing.net (a notoriously unreliable site at times), who claim a source has seen a 'casting board' with Gordon-Levitt's name listed next to The Riddler as 'interested'. Interesting indeed. I'll see your arched eyebrow and raise you a chin stroke.

If it's true (and to be honest, someone being 'interested' in Batman 3 is hardly big news) then we can start speculating how exactly The Riddler will fit into Christopher Nolan's Batman universe - and what direction Joseph Gordon-Levitt will take him. If it's false, then GAAAAHH. (*curses sky*)

Frankly, I'm starting to think Nolan's between-Batman movies are better than the main events themselves, but this is definitely a step in the right direction as far as casting goes, and makes a lot of sense given Gordon-Levitt's involvement in Inception. If you were working with the guy, you'd ask to be in his Batman movie too, right?

It's Comic-Con this weekend, and though no official Batman announcement is expected, stranger things have happened ("Ladies and gentlemen, your new Hulk, Nicolas Cage!"). Now that Inception has been released, and to a positive reception no less, Nolan's really got no rock to hide behind any more. The sequel to The Dark Knight will be released in almost exactly two years time on 20 July, 2012, so surely information will soon be forthcoming.

As it happens, I'm a huge fan of Joseph Gordon-Levitt's work and have been since Brick. He's excellent in The Lookout and my man-love of (500) Days Of Summer is quite the scandal around these parts. I reckon he'd make a great villain, as long as his Riddler isn't noncing around in a stupid costume putting on a stupid voice and causing pointless chaos. Save that for GI Joe 2.

More:  Batman 3  Joseph Gordon-Levitt  Christopher Nolan
Follow us on Twitter @The_Shiznit for more fun features, film reviews and occasional commentary on what the best type of crisps are.
We are using Patreon to cover our hosting fees. So please consider chucking a few digital pennies our way by clicking on this link. Thanks!