Ryan Reynolds' Green Lantern will eye-fuck the shit outta you

"Kiss my ring," says Ryan Reynolds, in his new role as eco-warrior Greenzo. Or maybe it's The Riddler. Or perhaps Kick-Ass. Or The Green Hornet. It's probably one of those.

Here's a sneak preview at Ryan Reynolds in his full Green Lantern costume; a piece of kit so top secret it only exists in a computer. Reynolds' suit is pure motion-capture CG, so he's spent the last month dicking about on set in his pyjamas with ping pong balls stuck to his nuts.

First thoughts? (*shrugs*) Doesn't look any more or less special than your average superhero cossie to me. Maybe it's a little tighter, but when you have abs like Ryan Reynolds, you're going to want that baby to be as tight as can be. You could grate cheese on those abs. But that would be unhygenic, and Reynolds' publicist wouldn't allow it.

What's more, I thought we were past the whole 'tiny face mask concealing one's identity' thing? There's no chance this could be mistaken for anyone else. Even if The Green Lantern was headless, I could still tell it was Ryan Reynolds from his snail trail.

We'll probably see some more pictures and hopefully footage when Comic-Con kicks off next weekend, but for now, just soak in this image, so when you lie back on your bed tonight, you can just pretend you're Scarlett Johansson and drift away. 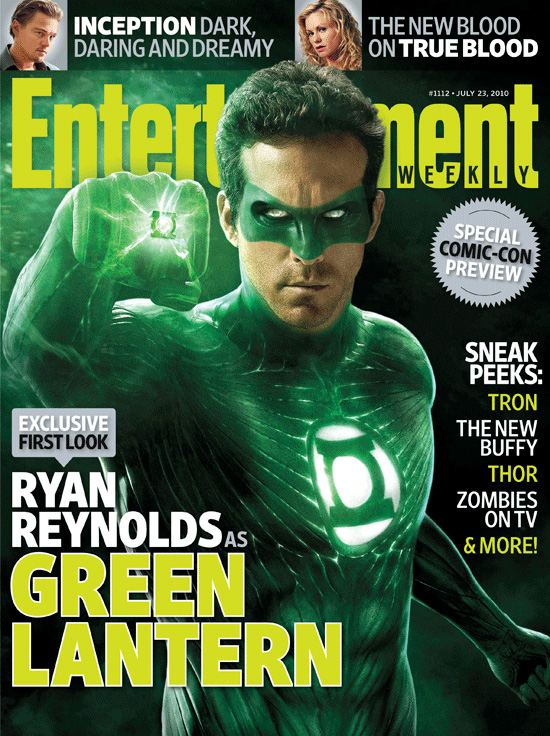 More:  The Green Lantern  Ryan Reynolds  DC Comics
Follow us on Twitter @The_Shiznit for more fun features, film reviews and occasional commentary on what the best type of crisps are.
We are using Patreon to cover our hosting fees. So please consider chucking a few digital pennies our way by clicking on this link. Thanks!