Is there a condition that can be diagnosed where an actor becomes so famous, he only thinks himself worthy of superhero roles? If so, it should be called Ryanreynoldism. Not content with appearing in Marvel's Blade Trinity, Reynolds then signed on to play Deadpool at the same time as agreeing to play The Green Lantern. Now he's playing some dude called Paper Man, but at least he's fictional. Behold the super-ego!

Lantern first. There's been nerd noise on the net this week about what form The Green Lantern's costume will take. Artist Jason Palmer posted the design below to his DeviantArt profile, claiming he was working on the DC property and that this was one of the rejected designs. Verdict: tight. 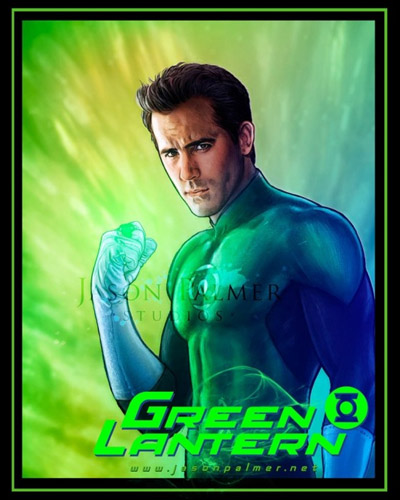 Now, SlashFilm are carrying an exclusive claiming that Reynolds is being motion-captured while shooting, and that the suit will be added in post-production as a CG creation. The movie's costume designer Ngila Dickson, who I'm imagining looks exactly like Edna from The Incredibles, decided that the spandex superhero suit had been stretched out of all recognition, and something digital was required. Controversial, yet interesting. Don't you agree?

Now, onto other projects. A trailer has been released for indie comedy Paper Man, starring Jeff Daniels as a reclusive writer who conjures up a fiction superhero in the form of a bleached blonde Ryan Reynolds. Get out your indie movie trailer cliché checklist, because this one's got them all - twee animated visuals, a friendship formed in the most unlikely circumstances and melancholic guitar. Dude... it's like someone saw my livejournal page and made a movie about it!

More:  Ryan Reynolds  The Green Lantern  Paper Man
Follow us on Twitter @The_Shiznit for more fun features, film reviews and occasional commentary on what the best type of crisps are.
We are using Patreon to cover our hosting fees. So please consider chucking a few digital pennies our way by clicking on this link. Thanks!