See the new Titanic 3D poster and trailer (in 2D)

James Cameron's 3D re-realisation of the infamous ill-fated maiden voyage sets sail with a new poster and trailer. We up periscope to take a look. Something something poop deck.


This is probably one of the most difficult things I've ever written - I can feel my fingers curling away from the keyboard as I try to type. Despite my default position of hating on everything, and the multitude of reasons to do so, I actually quite like Titanic. That is, I don't hate it - which is a pretty good result all things considered. James Cameron must be thrilled. Not as thrilled as he's going to be when the reworking splashes down next year, however.

Currently the second highest-grossing film of all time (behind Cameron's own Avatar), Titanic 3D is no mere exercise in dimensional shifting. April 18th 2012 marks the 100-year anniversary of the tragedy, which means Titanic stuff is going to be everywhere, and with an April 6th release date... this is going to be huge, people. That $18 million spent retrofitting the 3D is going to seem like a drop in the ocean (of profits).

Enough of my waffling and bad puns - we promised you a 14 year old picture of Leonardo DiCaprio and Kate Winslet, and here it is: 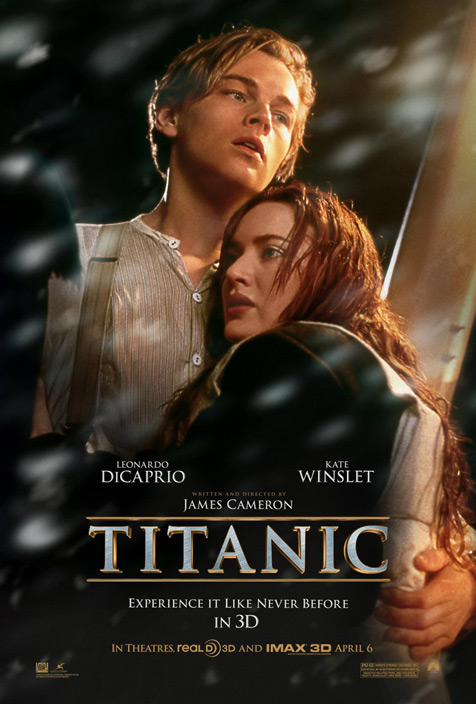 There's also a new trailer which you can watch below, or head over to the film's Facebook page where James Cameron has recorded a personal introduction, just for you. Now there's a man who looks like he'd hunt you down and strangle you for your money - not like Lucas, who'd be left gasping in a puddle of his own sweat after a few steps.

But seriously this is the only reason anyone wants to see Titanic in 3D.

Clang!
More:  Titanic  James Cameron
Follow us on Twitter @The_Shiznit for more fun features, film reviews and occasional commentary on what the best type of crisps are.
We are using Patreon to cover our hosting fees. So please consider chucking a few digital pennies our way by clicking on this link. Thanks!