One thing I like about the BAFTA TV Awards is how none of them is called 'Best'' anything. What's more British than that? It's like sports day when the kid who turned up with no kit and had to run in his pants still got a prize because everyone's supposed to get treated the same. If that kid were here today and not strung out on glue in a car park stairwell somewhere, he'd tell you the BAFTA TV Awards 2011 winners are all after the jump.

Female Performance in a Comedy Role
Jo Brand ' Getting On

Male Performance in a Comedy Role
Steve Coogan ' The Trip 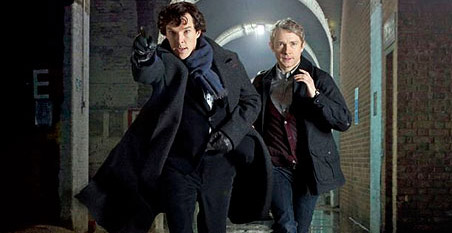 "Quickly, Watson! If we don't get there by eight, Hugh Bonneville will have scoffed all the sausage rolls!"

Single Documentary
Between Life and Death

YouTube Audience Award
The Only Way is Essex
Very little to argue with there in any of the categories worth mentioning. Sherlock's a deserved winner in the Drama Series category, it being the best-acted, best-written and best-shot thing (ie it actually looks like it was made by Americans) made in Britain for years. Good to see Martin Freeman win for Supporting Actor too. Shame Benedict Cumberbatch (I know, too long: 'B-Cumb'' and 'Benny C-Batch'' are two ideas we're kicking around) didn't win Leading Actor, but the whole build-up was all about whether it would be him or Matt Smith so it seems BAFTA pulled the old switcheroo for the headlines.

I also can't help but endorse ITV News at Ten's nod for its coverage of the Derrick Bird murders in Cumbria. If there's anyone quite as expert as ITV when it comes to collaring obviously traumatised passers-by in the street and demanding: "Did you see the murders? DID YOU? Did you look into the cold, dead eyes of a KILLER? Cry tears for me!" then I've yet to see them in action.

Ah, they make you proud to be British, don't they? Sure, they're not the Oscars, or even the BAFTA Film Awards, but hey, they're ours. We know they're a bit shit, but try taking them away and we'll invade your country and lose to you at football.

More:  BAFTAs  Awards  Sherlock  BBC  Benedict Cumberbatch  Martin Freeman  Steve Coogan  Matt Smith
Follow us on Twitter @The_Shiznit for more fun features, film reviews and occasional commentary on what the best type of crisps are.
We are using Patreon to cover our hosting fees. So please consider chucking a few digital pennies our way by clicking on this link. Thanks!