Every now and again you read a piece of movie news - inevitably remake related, because let's face it that's what 90% of all news is these days - that causes you to fall to your knees, throw back your head and scream "NOOOOO!" at the top of your lungs. Well today isn't one of those days, because the remake of Short Circuit is still happening, and it still doesn't matter because the original is still a heap of junk.

As Matt said in October 2009, Short Circuit was very much "a product of the 80s", and that's where Johnny 5 and his borderline racist sequel can stay. Nobody is impressed by things that look like broken Walkmans anymore. In fact, the level of open disdain for Short Circuit and any attached sequels or remakes has been approaching infinity since the early 90's if this graph data we've collated is to be believed: 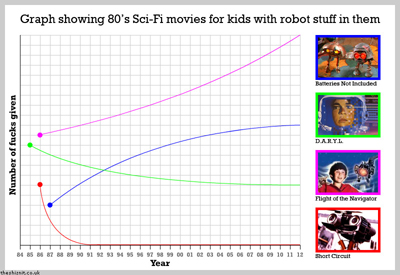 But how can we be so confident a new take on Johnny 5 will be a turkey before even seeing a screenshot or a trailer? The chap replacing Steve 'Dr. Dolittle 2' Carr at the helm is Tim Hill - who you may know as the director responsible for Garfield 2 and Alvin And The Chipmunks, but we prefer to think of him as the guy who ruined Bill Murray, David Cross and Jason Lee's credibilities in the space of a year. Talk about swapping tit for tat.
At least if this doesn't turn out so good for Number 5, he can always fall back on some new skills learnt during his time in the wilderness... 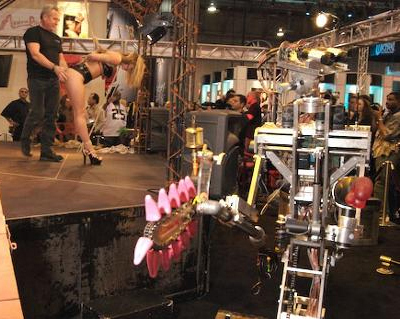 "More input, Ma'am?"
More:  Short Circuit  Tim Hill  Unnecessary Remakes
Follow us on Twitter @The_Shiznit for more fun features, film reviews and occasional commentary on what the best type of crisps are.
We are using Patreon to cover our hosting fees. So please consider chucking a few digital pennies our way by clicking on this link. Thanks!