Somehow The Karate Kid 2 is now an excellent business decision

HAS EVERYBODY BEEN TAKING CRAZY PILLS?

America has been so preoccupied with the BP oil spill and beating England in a 1-1 draw at the World Cup, they went and let $55.7 million worth of audience go and see the remake of The Karate Kid. Now, industry insiders are stroking their soul patches, claiming they knew it was going to happen all along, and preparing The Karate Kid 2 for production.

Somehow, a remake of a movie that was generally considered to be more than a little shitty back in the '80s has performed so well at the box-office, a sequel is already being prepped. The Karate Kid 2. A sequel to a remake. Of The Karate Kid. I'd go and lie down but the banner pic keeps looking at me.

Director Harold Zwart has claimed there is no plot as such at the moment, but a sequel to The Karate Kid has already been confirmed by the suits.

"
"
"I personally think it's now so much on its own two feet, given the success, that it would be interesting to see where we could take it without ever thinking about the old ones.

Every now and then we discussed it...But the truth is, when you see Jackie and Jaden, they're like a really good film couple. On and off camera, I was watching how they were pulling practical jokes on each other and throwing rocks in the lake, and you just want to keep looking at them because they have a great dynamic and great humor."
Still, a sequel to The Karate Kid could potentially be good. I certainly can't think of anything foreboding at all that would suggest otherwise. I mean, it's not like there's a parallel universe where this has already happened and it turned out to be utterly shit, is there? 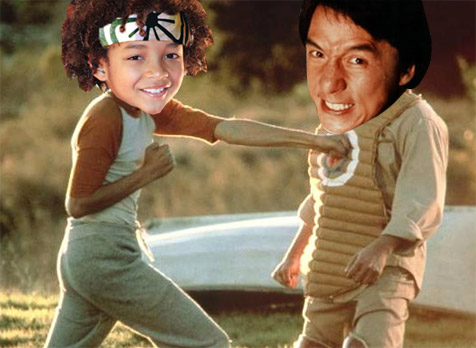 Official Shiznit prediction: The Karate Kid 2 will feature Will Smith's daughter. FACT.
More:  The Karate Kid  Jackie Chan  Jaden Smith
Follow us on Twitter @The_Shiznit for more fun features, film reviews and occasional commentary on what the best type of crisps are.
We are using Patreon to cover our hosting fees. So please consider chucking a few digital pennies our way by clicking on this link. Thanks!