And I'm not just saying that because 'shit' begins with 's': Hans Zimmer, Pharrell Williams, Dave Stewart, Johnny Marr and Incubus’s Michael Einziger will all be squabbling over the triangle when they team up to record the soundtrack for The Amazing Spider-Man 2.


I'm all for experimentation when it comes to soundtracking movies. I was perfectly happy with the trend of getting established bands and artists to provide movie scores from a few years back: Basement Jaxx on Attack The Block, The Chemical Brothers for Hanna, Daft Punk on Tron: Legacy and that haircut from Kasabian on that film where Colin Farrell nobs Keira Knightley. Everyone was happy with that, right?

But this? It feels like someone couldn't say no. Composer Hans Zimmer is more than capable of creating a soaring score all on his lonesome, even if his head is dangerously close to falling off. The appointment of Pharrell Williams in an unspecified musical role sounded like a canny move: everything the man touches turns to hits, so why not a superhero soundtrack? Then suddenly, everyone is calling in a favour and getting their friends on board, and before you know it, there's a queue for the loo in Spider-Man 2's sound editing suite and the guy from Incubus has eaten all the complementary donuts. 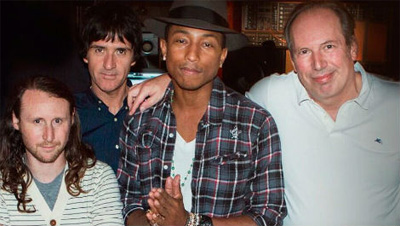 Dave Stewart was obviously having a poo.


I can totally get on board with a Pharrell superhero soundtrack. I'd even say that idea was 'fly' (*pulls baseball cap over face in shame forever*). The same goes for a Dave Stewart score (if you conveniently forget All Saints epic Honest), or a Johnny Marr score (his guitar work on Inception was most triumphant) but herding all these talented people into one room and expecting a coherent result doesn't seem much like a strategy to me. The Travelling Wilburys were a beautiful fluke, you guys. Everyone stop trying to be the next Travelling Wilburys.

I will no doubt be proved wrong and will hold my hands up and admit it if so, but don't be surprised if Spider-Man is swinging next summer to a song with loud rhythmic drums, screeching psychedelic guitars, gravel-throated American rock riffs, pulsing Teutonic synth beats and some bloke singing in falsetto over the top, telling you to take your shirt off.

More:  The Amazing Spider-Man 2  Hans Zimmer  Pharrell Williams  Dave Stewart  Johnny Marr  That Guy From Incubus  Music
Follow us on Twitter @The_Shiznit for more fun features, film reviews and occasional commentary on what the best type of crisps are.
We are using Patreon to cover our hosting fees. So please consider chucking a few digital pennies our way by clicking on this link. Thanks!