Stallone wants Willis as the bad guy for The Expendables 2

Sylvester Stallone's The Expendables is quite literally blowing up right now around the world, but he's already thinking about a sequel, and who might play the big bad: he's tweeted Bruce Willis as a suggestion.

It trounced Scott Pilgrim and made Eat, Pray, Love look like a sack of shit: The Expendables proved that manly men still have enough muscle to rule all at the box-office. Now, writer/director/star Sylvester Stallone - he's a triple threat! - is plotting the inevitable sequel. More septuagenarians, I say! More!

Having popped up on Twitter in the last week, Sly suggested that Bruce Willis, aka the conveniently named fixer, Mr Church, could play the villain in The Expendables II: Still Not Expendable. 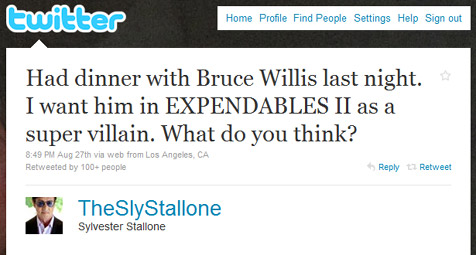 Willis only had one scene in The Expendables, in which he gives Stallone's men their gig and requests Sly and rival Arnie such each other's dicks while he watches. So I guess it's fair to say he'd make for an interesting villain in the sequel.

Honestly, though? I'd rather see more of Schwarzenegger's character, Trench - a rival merc gone rogue would make for a far more interesting dynamic than yet another government agent gone corrupt with power. There's probably still room for Jean-Claude Van Damme and Steven Seagal to get in on the act, too. Here's hoping.

Meanwhile, back on Twitter, Stallone was waxing lyrical about the trials and tribulations of a life in film. 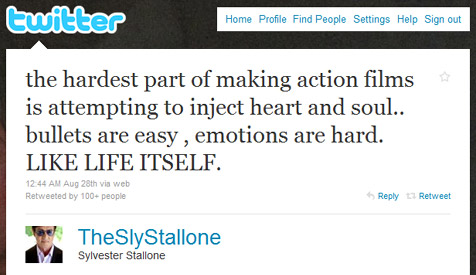 More:  The Expendables  Sylvester Stallone  Bruce Willis  Dolph Lundgren  Steven Seagal
Follow us on Twitter @The_Shiznit for more fun features, film reviews and occasional commentary on what the best type of crisps are.
We are using Patreon to cover our hosting fees. So please consider chucking a few digital pennies our way by clicking on this link. Thanks!