There's someone missing in the first Guardians Of The Galaxy image

Disney have released the first official image from their forthcoming Marvel intergalactic adventure, Guardians Of The Galaxy. We can't help but feel there's someone quite important missing, especially given the obvious Usual Suspects homage. Thankfully it was my New Year's Resolution to do more rubbish Photoshopping, so I made amends. Send the cheque to the usual address, Disney. 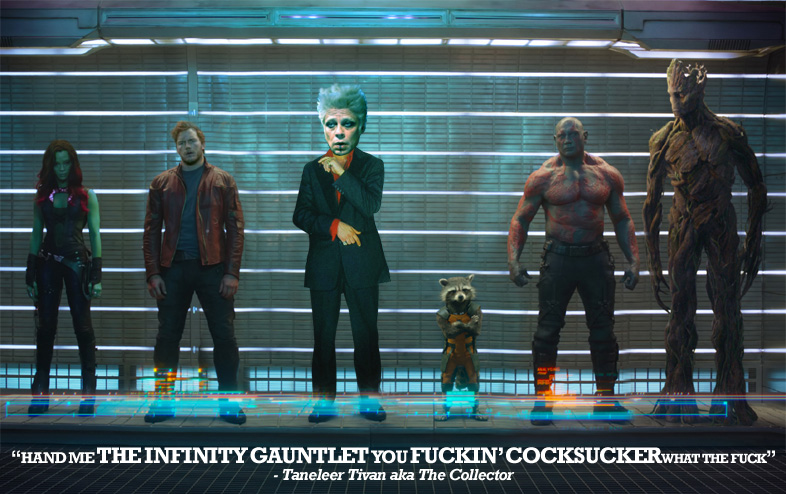 He'll flip ya. He'll flip ya for real. Click here for the non-hilarious version if you must. Oh, and here's the official synopsis:

"
"
"An action-packed, epic space adventure, Marvel's Guardians of the Galaxy expands the Marvel Cinematic Universe into the cosmos, where brash adventurer Peter Quill finds himself the object of an unrelenting bounty hunt after stealing a mysterious orb coveted by Ronan, a powerful villain with ambitions that threaten the entire universe.

"To evade the ever-persistent Ronan, Quill is forced into an uneasy truce with a quartet of disparate misfits–Rocket, a gun-toting raccoon, Groot, a tree-like humanoid, the deadly and enigmatic Gamora and the revenge-driven Drax the Destroyer. But when Peter discovers the true power of the orb and the menace it poses to the cosmos, he must do his best to rally his ragtag rivals for a last, desperate stand - with the galaxy's fate in the balance."
That's right, it was also my New Year's Resolution to get better SEO.

More:  Guardians Of The Galaxy  Marvel  James Gunn  Bradley Cooper  Benecio Del Toro  Chris Pratt  Zoe Saldana  Dave Bautista  Vin Diesel
Follow us on Twitter @The_Shiznit for more fun features, film reviews and occasional commentary on what the best type of crisps are.
We are using Patreon to cover our hosting fees. So please consider chucking a few digital pennies our way by clicking on this link. Thanks!