, who illustrated their story with a picture of Scarlett Johansson.

For the record, no, I don't think there will be a Black Widow spin-off from Iron Man 2, for the following reasons: firstly, the character is clearly just eye-candy, and secondly, every time a big-budget movie has a feisty female character in it, journalists ask the same stupid questions about them starring in their own spin-offs. It happened with Jinx in Die Another Day, it happened with Angelina Jolie in Wanted, and it's happening here.

This time, it was Marvel Studios president Kevin Feige who had a mic stuck under his nose, and was asked if it was possible that Scarlett Johansson's Black Widow might one day get her own movie. The reply?

"
"
"Definitely possible. Yes, absolutely."
A response, which, when you look at it, is totally non-committal and means absolutely nothing. "If you're asking me is there the slightest possibility that one day a film might be made with a female superhero starring an attractive woman who I can guarantee your readers will find sexually exciting, then sure, it's absolutely possible." Wow, what a scoop!

I don't know, I think if you ask dumb questions to the right people, you can make just about anything into a news story these days.

And then the headline the next day reads...

MICHAEL BAY STAYS COY ON HIS ROBOTACULAR REMAKE OF LORD OF THE RINGS... OR DOES HE???

Anyway, you waded through the usual whiny bullshit to get here, so enjoy your Scarlett Johansson picture below. 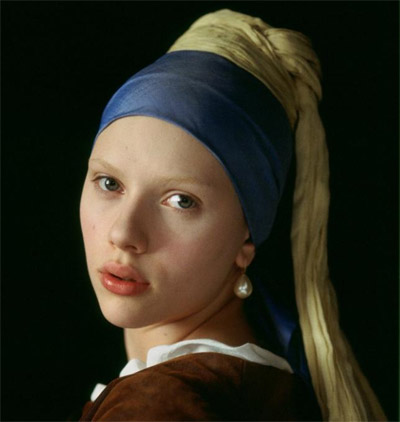 Hot.
More:  Scarlett Johansson  Black Widow  Iron Man 2  Kevin Feige
Follow us on Twitter @The_Shiznit for more fun features, film reviews and occasional commentary on what the best type of crisps are.
We are using Patreon to cover our hosting fees. So please consider chucking a few digital pennies our way by clicking on this link. Thanks!