Michael Bay' official website released some information today about the production of Transformers 3 which will thrill and astound you all.

Little is known about Transformers 3, other than that Michael Bay threw a hissy fit and said he wasn't directing it, then retracted his statement when Paramount dumped a truckload of cocaine and Russian hookers on his front lawn. Still, at least Bay's official website is keeping us in tantalising tidbits of Transinformation.

"
"
"Spoke with Michael today and got some little info on TF3: there will be big action sequences shot in Chicago and Moscow this time around."
I know. Wow, right? Chicago and Moscow - how topical is that? And just think how awesome it's going to be, filming those elaborate fight scenes with those 20-foot robots! Hopefully we'll get an insight into this fascinating procedure on the DVD's extra featu- Wait a minute...

So they're going to Russia to point a camera up in the sky and run around a bit? That's not news. Sorry.

Something I must tell you all, though; Michael Bay's official website goes by the name 'Shoot for the edit', spells itself 'michael bay dot com' and, until recently, had this picture as its front page. 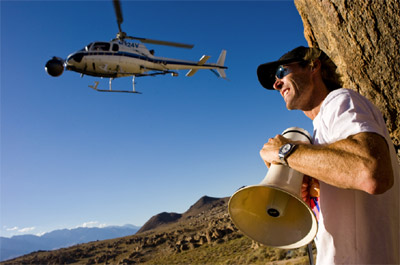 More:  Transformers 3  Michael Bay  Robots  Hookers  Robot Hookers
Follow us on Twitter @The_Shiznit for more fun features, film reviews and occasional commentary on what the best type of crisps are.
We are using Patreon to cover our hosting fees. So please consider chucking a few digital pennies our way by clicking on this link. Thanks!