Twilight has the most anodyne IMDB movie trivia ever

I swear I'm not trying to shit on Twilight's parade, but... well, they just keep coming to me. For work reasons (honest injun) I had to look up some Twilight trivia, expecting some fun titbits of info and cool easter eggs. I was disappointed.


I have absolutely no problem with fanaticism of any kind: I love that people can feel so passionately over something as simple as a series of books, films, pop stars, stamps, or whatever. However, there comes a time with pop culture phenomenons like Twilight, where that fanaticism becomes so voracious, it consumes everything of interest but just keeps going, analysing every micron of information until anything even slightly associated with the franchise becomes 'relevant'. Birthdays. Haircuts. Cars.

In short: while sifting through the IMDB trivia for The Twilight Saga, I found only a handful of points worth noting. The rest was shit like this: 'trivia' so trivial I had to spice it up with reaction gifs.
Twilight

"
"
"Robert Pattinson moved to Oregon a few weeks before filming began and didn't talk to anyone to try and feel as isolated as Edward Cullen." 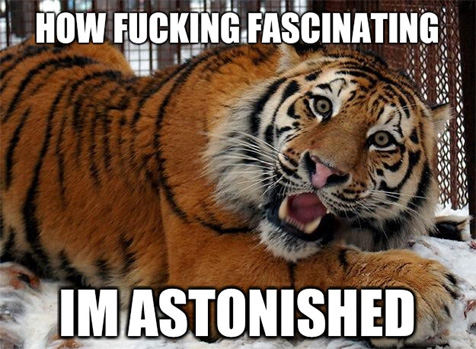 "
"
"When the 'evil vampires' make their first appearance, actors Cam Gigandet, Rachelle Lefevre and Edi Gathegi are all wearing little slippers painted like bare feet."
"
"
"Kristen Stewart turned eighteen while filming the movie and was rewarded with a birthday cake - and a full night of shooting."

"
"
"Nikki Reed (Rosalie Hale) and Jackson Rathbone (Jasper Hale) learned how to play baseball left-handed for the famous baseball scene."
"
"
"Christian Serratos wore her own glasses for her part as Angela Weber."

"
"
"The jacket worn by Solomon Trimble in the LaPush beach scene was handmade by his mother from a Pendleton blanket." 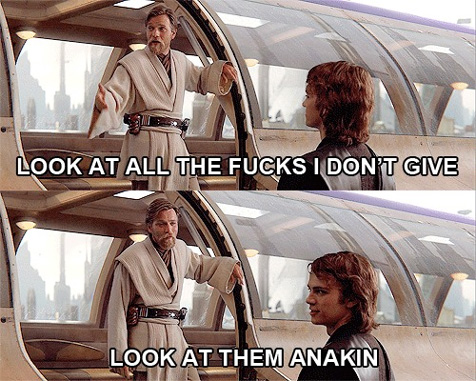 "
"
"In the kissing scene Bella is wearing one of director Catherine Hardwicke's shirts."

"
"
"Noot Seear was painted completely white, in spite of not tanning for the previous two months."

"
"
"Ashley Greene wore a different wig than the one she wore in Twilight, to portray Alice Cullen. She also cut her hair quite short so that it could fit under the wig."
"
"
"Robert Pattinson refused to have his eyebrows waxed as extensively as he had in Twilight, resulting in a slightly bushier look on Edward."

"
"
"In the school parking lot scene it's Bella 18th birthday. That scene was shot on April 9 which was Kristen Stewart's 19th birthday."

"
"
"At the entrance of Emily's house, a Quileute drum is visible there. According to the production designer, David Brisbin, this was done as an appreciation to a young Quileute girl who gave Brisbin the drum that she made (as a custom) during meeting with the La Push Quileute executive council - Brisbin was with the design team meeting them at that time while preparing to design Jacob and Emily's house."

"
"
"In the book, Bella (Kristen Stewart) works part-time at a sporting goods store with Mike Newton (Michael Welch), in which his family owns. In the film saga, Bella never has a job and her friendship with Mike becomes very distant."

"
"
"Jackson Rathbone's (Jasper) favorite actress is Bryce Dallas Howard who happened to be cast in this."

"
"
"The scene that Ashley Greene was anticipating the most to film is "the big fight scene"."
"
"
"Robert Pattinson refused to let his eyebrows be plucked/waxed down as they had been in the previous two films."

"
"
"When Charlie is sitting at the kitchen table looking at the Riley flyer, it states that Riley was born April 10th, 1990. This is the day after Kristen Stewart's birthday. She was born April 9th, 1990."
"
"
"Kristen Stewart received her high school diploma by correspondence one week before filming Bella's graduation scene. She took a mock graduation photo with an extra so she'd have a photo of herself graduating high school." 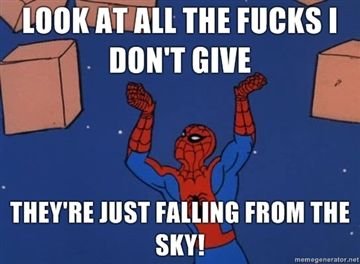 "
"
"Kristen Stewart said Taylor Lautner was in tears when the cast watched an unfinished cut."

"
"
"When Bella tries on wedding shoes with Alice, Bella is wearing two rings which both belong to Kristen Stewart in real life."

"
"
"Robert Pattinson took a boat driving lesson so he would be able to drive the boat in the honeymoon scenes. Despite taking lessons, he crashed the boat in both the lessons and while filming in Brazil."

"
"
"On the third day of filming in Brazil the cast and crew got stranded overnight on the island location used for Isle Esme due to a severe rain storm. The crew had to cover the furniture and props in the house with tarps to prevent water damage due to the rain and people having wet clothes."
"
"
"The sex scene between Edward and Bella during the honeymoon is only 40 seconds long."

You'd never guess Twilight was so dull from all those thrilling posters of the cast just standing around, emotionless, in front of clouds.

More:  Twilight  The Twilight Saga Breaking Dawn Part 2  Kristen Stewart  Taylor Lautner  Robert Pattinson
Follow us on Twitter @The_Shiznit for more fun features, film reviews and occasional commentary on what the best type of crisps are.
We are using Patreon to cover our hosting fees. So please consider chucking a few digital pennies our way by clicking on this link. Thanks!