In the second of my attempts to dispel any notion we're a proper website about movies and stuff, here's a collection of screenshots from the various Prometheus trailers that have been released so far, arranged by someone far cleverer on Reddit to form what is most likely the whole entire plot, maybe. Spoiler alert perhaps! 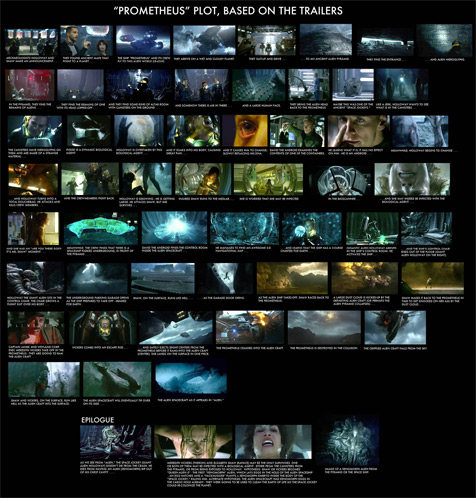 A few drafts of the alleged screenplay have been 'out there' for a while now, but going by the brief snippets of scenes available in the trailer footage, and employing some knowledge of sci-fi tropes and series mythology, this is a pretty convincing effort at establishing what we can expect to see when June rolls around.

Despite some absent details (possibly deliberately kept out of trailers), the rest of the pieces seem to fit. And you know what? I couldn't care less about spoilers - it still looks like an amazing ride, and knowing the story isn't going to detract from the atmosphere, or from the contribution of Prometheus to the larger 'Alien' Universe it will become part of.

So, is Ridley Scott still pretending this isn't a prequel to Alien?

If you created this originally and want crediting, drop us a line and we'll gladly oblige. Cheers to Charlie at Ultra Culture for pointing it out.
More:  Prometheus  Ridley Scott
Follow us on Twitter @The_Shiznit for more fun features, film reviews and occasional commentary on what the best type of crisps are.
We are using Patreon to cover our hosting fees. So please consider chucking a few digital pennies our way by clicking on this link. Thanks!