Team Shiznit returned to defend their honour at the second Den Of Geek pub quiz on Tuesday. We failed, but at least we turned up. Sources say a lovely evening was had by all. Even losers like us.


Readers, I'm balanced on the tip of my sword, ready to commit hari kari the instant I post this article - I'm appalled to inform you, we're no longer the biggest movie nerds in town. Yes, somewhere in London and its surrounding areas is a collection of folk who know even more pointless movie trivia than us. Shocking, isn't it?

Cult movie website Den Of Geek laid on another pub quiz bash at the Jerusalem Bar on Tuesday night (which is underground and has no mobile signal, therefore was practically made for quizzes) and yours truly were in attendance. Egos were being stroked the minute we entered the building; we were introduced as "the team to beat". Uh-oh. Foreboding.

Things started easy with a picture quiz - everyone loves a picture quiz. Confidence was gushing all over our table like so much spilt wine. See how many you can get! 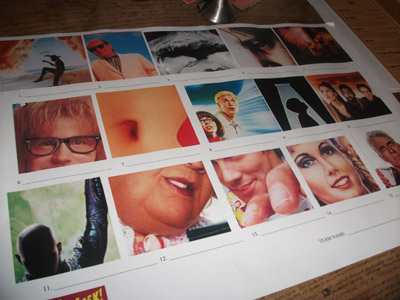 But which Big Momma's House was it?


Then shit started to get real. It was quite the crowded house and quite the competition. Questions got progressively tougher as the night wore on. Below are some examples of the bonus questions, which no human on Earth could ever be expected to even get in the vicinity of being anywhere near to hazarding an estimated guesstimate. 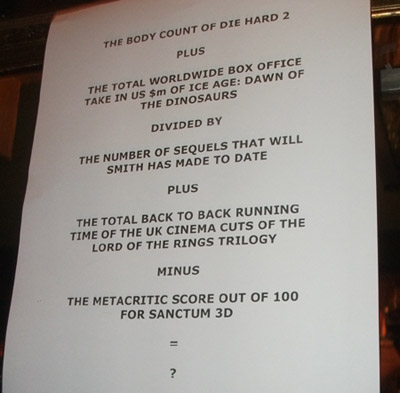 
Guys, we came so close. We were winning going into the final round, but I'm sorry to say we completely crashed and burned. Questions popped up from some decade called the seventies or something. Which Carry On film had who or what in it? Something something Condorman? Err... err... just put Robocop. Half the answers are always Robocop.

When the final numbers were totalled up, Team Shiznit came a despicable fourth place, missing out on a podium finish, made all the more bitter a defeat by the fact there wasn't even a podium to hide behind. 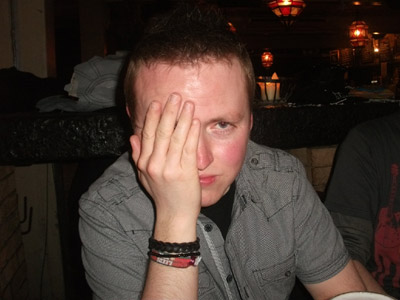 The stench of failure was unbearable. Rob wept, openly.


Congratulations I guess to the teams of superhumans who answered almost EVERY QUESTION RIGHT. There was one small consolation: the first place prize? A shiny new Blu-ray player each. Yeah, that's right - the same Blu-ray players we won last time. Awww yeah.

Cheers and mad props to Den Of Geek for letting us be the only online film website involved and thanks to the Jerusalem Bar for serving us only the finest cheeseburgers and Kronenbergs. We'll do better next time, I promise. Maybe I'd better not kill myself just yet.

More:  Pub Quiz  Den Of Geek  Fallen Heroes  Events
Follow us on Twitter @The_Shiznit for more fun features, film reviews and occasional commentary on what the best type of crisps are.
We are using Patreon to cover our hosting fees. So please consider chucking a few digital pennies our way by clicking on this link. Thanks!