In an exclusive interview, everyone from The Walking Dead has professed their total confidence that some random punter they met can cure the zombie pandemic if they get him to Washington.

about their delight at having stumbled across Dr Eugene Porter, who is "100%, no question" going to fix the zombie pandemic.

"I am as convinced of his academic credentials as I would be of anyone else who rocked up looking like Billy Ray Cyrus and said he was a doctor," confirmed sword enthusiast Michonne. "Which is to say, entirely convinced. He says he has a PhD in dezombification, so I'm not sure what more evidence you could require." 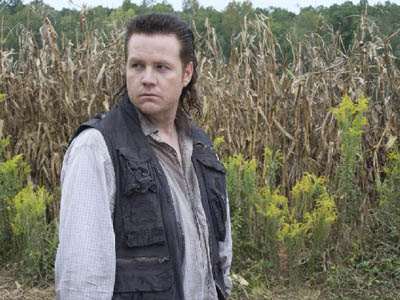 Dr Porter, a contemporary of Dr Alban and Doctor And The Medics at the Institute For Knowing How To Get Rid Of Zombies.


The group dismissed concerns that Dr Porter is never all that specific about how he plans to cure the disease.

"Oh come on, he just gets tired easily and doesn't like talking about it," said Daryl Dixon, removing a crossbow bolt from a zombie's eye. "It's all just sciencey stuff anyway; we wouldn't understand it. It's like, who knows which one's positive and which is negative, anode or cathode?

"Literally no one knows that. It's impossible to retain the information in your head. Leave it to the experts, that's what I say."

"No, there's no point whatsoever in encouraging him to share the information with someone else so as to leave a chance for the survival of the human race in the event of his death," said Carl Grimes, in a voice slightly less annoying than the one he had two seasons ago. "Obviously you've never heard that expression about keeping eggs in baskets.

"It's about having as few baskets as possible so you don't have to carry as many."

More:  The Walking Dead  Norman Reedus  Andrew Lincoln  Josh McDermitt  Danai Gurira  Chandler Riggs  AMC  FOX
Follow us on Twitter @The_Shiznit for more fun features, film reviews and occasional commentary on what the best type of crisps are.
We are using Patreon to cover our hosting fees. So please consider chucking a few digital pennies our way by clicking on this link. Thanks!