Why the so-called 'Batman murders' are none of our business

There is no doubt that the Aurora massacre - in which a masked gunman entered a movie theatre and shot dead 12 people, injuring 58 others - is a terrible tragedy. I'll leave it to the real news outlets to report the details and will spare you my personal opinions on the politics of the issue, but what I can't stand idly by and watch is the nauseating way in which the media have made this story something it isn't - and how the film community have responded.


Suspect James Holmes, 24, entered the Century 16 movie theatre in Aurora, Colorado, and opened fire. 10 people died on the scene, two died later from their injuries. A total of 58 people were injured, including children. Holmes used a rifle, a shotgun and two pistols, which were purchased legally. He was arrested shortly afterwards, upon which he told police, "I'm The Joker". The screening was of The Dark Knight Rises.

This information is listed in order of importance. Note, however, that the final fact is the one you'll read in all of the headlines.

The Evening Standard ran with: "BATMAN MASSACRE". The Sun opted for: "BATMAN MADMAN". The Daily Star's headline? "BATMAN PSYCHO SHOOTS 12 DEAD". The Daily Mail's headline this morning simply read: "I'M THE JOKER!" Every single news outlet has leaped on the fact that the film screening at the time of the shooting was The Dark Knight Rises, like they can't believe their luck they get to sell a murder story with pictures of Batman on their covers. The Standard even had a sidebar on the Rotten Tomatoes death threats, as if that was somehow now more relevant. 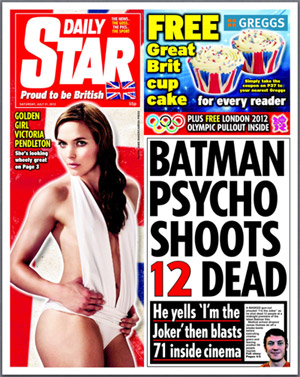 
I was all ready to rant on how the Batman connection was almost entirely circumstantial - about how, if the film showing at the time was something less well-known, like, say, Ted, the coverage would have been far more sensitive. That was until news of Holmes' alleged "Joker" comment to police came through, and that he had died his hair red for the occasion (not green, mind you). It would appear that the killer knew exactly which screening room he was entering into and chose The Dark Knight Rises on purpose. The police have not yet established a motive, but that hasn't stopped the press from formulating their own opinions.

Does this tenuous Batman connection excuse the media's obsession with piggybacking a blockbuster movie to sensationalise their coverage of a mass homicide? No it does not.

I won't even pretend to know what was going through the killer's head, but I'd imagine he picked his targets like most mass-murderers and terrorists do - by aiming to cause as much carnage in as big a crowd as possible. The Dark Knight Rises was the most popular movie of the weekend by far, ergo Holmes had a room packed full of innocent people to pick off. The fact that it was a Batman film shouldn't matter a jot.

Terrorists aren't targeting the Olympics because they hate sport. Suicide bombers don't blow themselves up on the underground because they dislike trains. If a madman shoots up people in a cupcake store, do we look to the baking community for answers? If someone blows up a coffee shop, does Starbucks have the finger pointed at them?

Despite the simple facts of the matter - troubled person with guns commits murder - the media's insistence on dubbing the shootings "The Batman Killings" or "The Dark Knight Massacre" cheapens the tragedy and is an insult to the families of those affected. The media's insatiable appetite for a story they can package with something as recognisable as an icon like Batman only sidelines the victims, condemning them as a footnote to something as trivial as a film release.

This is the point where I felt it necessary to add my two cents. The news media has done such a thorough job connecting the movie to the murders that the film industry has felt it necessary to react themselves. From huge sites like Deadline right through to the blogosphere, everyone - me included - has suddenly been asked for their opinion on the matter.

Folks, listen to me when I say the following: this is not our area of expertise and not even remotely of our concern.

Take Nikki Finke, the increasingly irrelevant industry insider who is nonetheless one of the most respected reporters in the business. Yesterday morning, she posted an article explaining how the Aurora shootings might affect The Dark Knight Rises' opening weekend box-office figures. Later that day, she breathlessly claimed to have successfully forced Warners to pull a Gangster Squad trailer which features footage of gangsters opening fire in a cinema.

This quote is verbatim, but I couldn't make up a better one if I tried:

"
"
"This morning I called on Warner Bros to take this trailer down immediately. The studio's response to me? "There's a meeting about this and then a decision will be reached." I just received the call that the trailer is being pulled. But only after I complained. And yet movie moguls wonder why so much of the country hates Hollywood values where money trumps everything, even during the Aurora theater shooting tragedy. Here's the horrible clip which no one at Warner Bros should have allowed to be made, much less released, in the first place."
That's right. That's one of the most influential film industry reporters actually saying Warner Bros were insensitive by not predicting the terrible tragedy in Aurora. Oh, and by the way, Warners had already started pulling the Gangster Squad trailer by 5am that morning. Finke quoted one local TV anchor, who said of the shootings: "Not what you expect to happen when you're waiting in line to go to the blockbuster film of the summer." Right, because you expect this to happen anywhere? Now do you see why we shouldn't be allowed to weigh in on issues outside our remit? 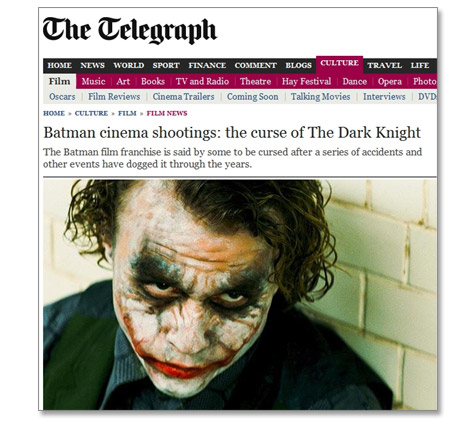 The bad taste award goes to The Telegraph, who had cobbled together an article within hours of the incident with the headline 'Batman cinema shootings: the curse of The Dark Knight', like these horrific murders were just the latest unfortunate incidents in a long line of somehow related incidents to affect a film. To their eventual credit, The Telegraph did take the article down rather than soak up the angry traffic like a Daily Mail hate-sponge, but the thought process behind the article's creation and publication remains utterly wretched.

When a story gets processed this far down the chain, a national tragedy ends up becoming mere link-bait. Salon.com ran a story entitled 'Does Batman have blood on his hands?'; SlashFilm, in typical fashion, published a notice of condolence ending with the line "There is nothing we at /Film can add to the conversation today". The gesture has good intentions but is entirely unnecessary: no one needs to hear what Peter Scieretta thinks on the matter, much less Ain't It Cool News editor Harry Knowles, who posted the most sensible thing he's ever written on Twitter yesterday: 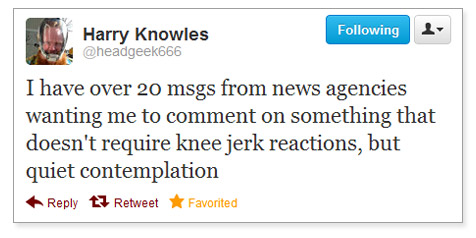 Empire's Damon Wise, meanwhile, posted this revealing tweet online late last night, showing just how many industry types were jostling to stick their oars in and answer a question nobody is asking them: 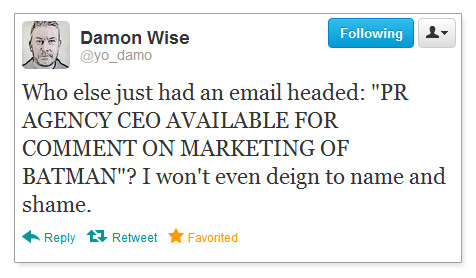 I can understand people in the film industry wanting to make a nice show of support, and I can understand anyone involved in film wanting to defend their livelihood from the usual, predictable right-wing assaults on violent content and age-ratings (countdown to Keith Vaz). I get that UK cinema chains like Odeon felt the need to bring in 'added' security measures (though I don't think it necessary) and I get that publications like the New Yorker are calling into question the wisdom of midnight film screenings (even though it won't solve a thing). I can even just about understanding the press asking for comment from the likes of Christopher Nolan and Gary Oldman, despite their slightest tangential relation to the story.

What I can't understand is this circle of self-perpetuating bullshit that sees the news media jazz up a tragic story by handcuffing it to a movie, then the film industry feed off that connection with a compulsion to get involved. Nobody should care what we think. It serves only to distract from the real issues of the story - like, say, what drove a young man to kill a room full of people, and how he was able to get his hands on the weapons and ammunition to do so.

Some people on my Twitter feed yesterday were treading carefully, afraid to post reviews or comment on The Dark Knight Rises in fear of appearing insensitive or that they were trivialising the shootings. It seems the press has already succeeded in that respect, using a popular movie as a springboard to sell a horrific event, tainting both irrevocably in the process.

Don't be shy - go and see The Dark Knight Rises. It's great. Tell the world what you think about it. Tweet about it, update your Facebook status, write your review and talk about it on discussion boards. Do your very best to separate the film from the tragedy. Grieve and mourn in good time, but please don't make the mistake of thinking Batman or The Dark Knight Rises has even the remotest connection to the Aurora tragedy: that's the greatest respect we can pay to the victims right now.

More:  The Dark Knight Rises  Serious Corner
Follow us on Twitter @The_Shiznit for more fun features, film reviews and occasional commentary on what the best type of crisps are.
We are using Patreon to cover our hosting fees. So please consider chucking a few digital pennies our way by clicking on this link. Thanks!