It's question mark in the headline time! Megan Fox has been touted to fill in for Rose McGowan in the long-awaited Red Sonja reboot. More importantly, will Robert Rodriguez be upgrading his girlfriend?

Way back in 2008, news reached us that Robert Rodriguez was planning a reboot of Red Sonja with his girlfriend Rose McGowan in the title role. He was so confident, he even released two cool looking promo posters. Fast forward two years, and that project stalled. Rose never did get to lick blood off her sword and contract some awful medieval disease. 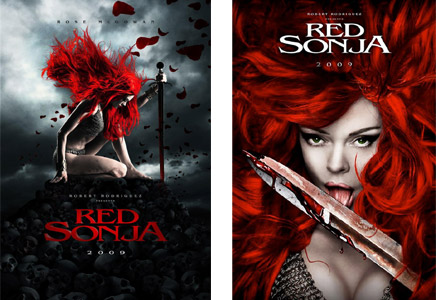 Now, with the Conan remake gathering pace, a Red Sonja movie may once again come to pass. Rose McGowan is out of the frame, having been cast in a different part in Conan. But Pajiba are reporting that the role of Red Sonja has been offered to... Bridgitte Nielsen. Not really: it's Megan Fox.

Frankly, it's a no-brainer to connect Fox with this sort of role - in the list of actresses who'd look hot in a chainmail bikini, she's got to be near the top. She's certainly adept at handling the pressure of the odd blockbuster and is a comic-book geek deep down at heart. The only problem is, the last time she top-lined a movie was Jennifer's Body, and no one saw it.

Two words: chainmail bikini. You know why a Megan Fox Red Sonja movie will sell to teenagers with disposal income? Because tits, that's why.

More:  Red Sonja  Megan Fox  Robert Rodriguez
Follow us on Twitter @The_Shiznit for more fun features, film reviews and occasional commentary on what the best type of crisps are.
We are using Patreon to cover our hosting fees. So please consider chucking a few digital pennies our way by clicking on this link. Thanks!