While the writers of CosmicBookNews.com sit back and enjoy the web traffic they've created by publishing a fake story about Bryan Cranston being cast as Lex Luthor in the forthcoming sequel to Man Of Steel, it has been reported by an unverified, unreported source that the writer of the article sucks goat dick.

TheShiznit.co.uk has been told that the author of the bullshit story, who cannot be named, sucks off goats all day and all night long, and that he also fucks chickens. Our source says that the reason the author made up the imaginary story instead of accurately reporting the facts is because "he was too busy smoking animal pole" and that the reason he invented a contact at Warner Bros was because "getting phony traffic to his site almost made him as happy as when he's blowing a bunch of horses". 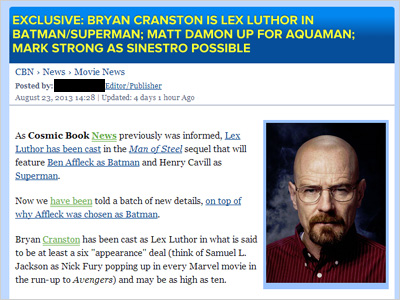 The article, which is a load of bollocks, is still online.


CosmicBookNews.com were unavailable for comment on the alleged goat-snorkelling, because we didn't ask them for a comment, because if we did we know we'd get an answer that isn't nearly as interesting as what we're publishing now. However, our mysteriously informed insider says that the website's entire editorial team - who reportedly smell of poo - have been known to circle-jerk one another during late nights in the office, "to congratulate themselves on making the internet worse".

There are still no firm details on the involvement of Bryan Cranston in the Man Of Steel sequel, nor has there been any official word on CosmicBookNews.com's erroneous reporting of Ben Affleck's 13-picture deal. However, an insider close to the team says the site's editor and his editorial staff celebrated the needless, pointless, depressing, entirely fictional reportage by re-enacting the movie, The Human Centipede.

"I mean, I didn't actually see them doing it," says our source. "But I reckon they totally would do that sort of thing."

More:  Superman  Batman  Rumours  Bullshit  Bryan Cranston
Follow us on Twitter @The_Shiznit for more fun features, film reviews and occasional commentary on what the best type of crisps are.
We are using Patreon to cover our hosting fees. So please consider chucking a few digital pennies our way by clicking on this link. Thanks!