X-Men: First Class swaps one hottie for another

When I say that researching for these pictures is the best part of my day, I'm really, really not lying.

Yet more casting news on the X-Men: First Class front: Alice Eve's breasts will now not be appearing as proto-mutant Emma Frost. Instead, Mad Men's January Jones will be slipping into Frost's revealing outfits.

I've never seen Mad Men, but I have seen Christina Hendricks, and I like what I see here, so Amazon can consider my box set order as good as placed. Plus I secretly fancy Jon Hamm, too. He is so dashing!

Finally, Bill Milner of Son Of Rambow fame will play a young, young Magneto. He's great, because he's 15 but his name is Bill. I follow him on Twitter. Is that weird? It's weird, isn't it.

Back to the news at hand. Gentlemen, I've prepared a visual comparison for you below in order to beter gauge your opinion on this crucial casting issue. Which would you 'do'? On the left, we have January Jones. On the right, Alice Eve. Oh, Sophie's Choice! 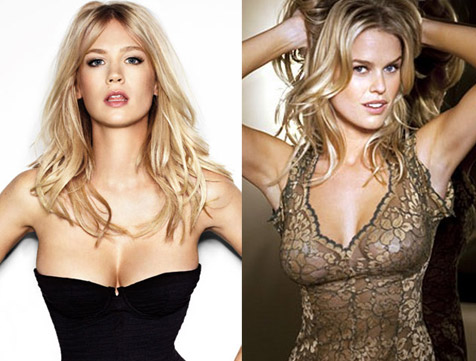 I love my job.
More:  X-Men First Class  Alice Eve  January Jones
Follow us on Twitter @The_Shiznit for more fun features, film reviews and occasional commentary on what the best type of crisps are.
We are using Patreon to cover our hosting fees. So please consider chucking a few digital pennies our way by clicking on this link. Thanks!