What a nice, interesting surprise. A Cloverfield sequel that nobody was expecting dropping a trailer out of nowhere and coming with a tantalising-yet-head-scratching title implying a connection to the first film that makes no sense whatsoever. I'm excited, but also... confused? Like a dog hearing somebody whistling on the TV. I have no idea what's about to come next, but it sounds fun.

And this, as it happens, is the film's greatest strength. Because there are so few films released now that make us feel like dogs hearing somebody whistle on the TV.


There's obviously a lot to be said about the spoilerific role that marketing has to play in promoting a movie. About how even remembering a specific scene in a trailer can be blamed for making us second-guess what's still yet to come in the film. And then there's a follow-on discussion to be had around how we even define the parameters for what constitutes a spoiler these days. Can I even mention here what happens at the end of Star Wars: The Force Awakens yet? No, of course not. Because, despite every single person in the planet - including newborn babies delivered this morning - having seen it twice already, it is still considered bad form.

So there's a tricky problem that has evolved around how we perceive a movie, how it should and shouldn't be marketed, what the correct etiquette is for discussing it afterwards, and whether or not the very glimpse of a terrible CGI monster in a trailer tells us that two battling superheroes will probably agree to team up and defeat an even greater threat than each other. These things are probably better left thrashed out by more informed minds in even thinkier thinkpieces. 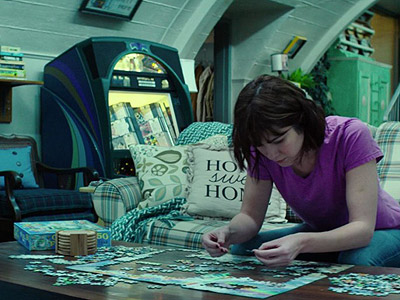 SPOILER: She may or may not complete this jigsaw.


All I can say is that watching 10 Cloverfield Lane was a genuine thrill in every sense because I had absolutely no idea what was going to come next at any point in the movie, and I can't remember the last time I felt that way about what is a reasonably high-profile release. I was on the edge of my seat, and then I was on the very edge of my seat, and then I fell off my seat and discovered a ledge - there was a ledge beyond the edge of my seat - and I was on the edge of that. All because, rather than have a year's build-up and anticipation, the film came out of nowhere, and rather than explicitly give away any plot details, the trailer offered mere snippets of shots and the sense of impending doom. Needless to say, going in knowing as little as possible clearly helps the viewing experience.

Which is why I have dedicated three paragraphs to the nature of spoilers instead of saying anything about the film. Because I don't want to ruin the same experience for anyone, but because I also feel an obligation to fulfil a certain word count in a review.

But seeing as you have come to this - a review of 10 Cloverfield Lane - to presumably find out some information about 10 Cloverfield Lane, here's the very basic set-up. Mary Elizabeth Winstead's Michelle is involved in a car crash and she awakes to find herself trapped in a bunker by John Goodman's Howard who claims to have rescued her (and fellow bunker-buddy Emmett) from some sort of horrendous attack happening outside, which has rendered the air toxic. It's basically like Oscar-winning film Room, but even better because there's the implication that we might see some giant alien monsters. Clearly women being held captive in bunkers is the story-telling touchstone of current times.


But is Howard telling the truth? Is this all taking place in the same world as the first Cloverfield? Is the twist going to be that MAN IS THE GREATEST MONSTER OF ALL? These are questions that will rattle around your head as the film keeps you on your toes with revelations and misdirection throughout.

As much as this is Mary Elizabeth Winstead's film, however, it is John Goodman who sells the tone at every turn. At times creepy and menacing, and at others vulnerable and emotionally fragile, Goodman carries the suspense all by himself with an unpredictability that will make you never watch King Ralph in the same light again.

But there are moments of levity too, as what is normal and common sense for doomsday prepper Howard comes across as unhealthily macabre to Michelle and Emmett. And when everyone is expected to play happy families, the result is hilariously absurd, even if it is uncomfortable to watch.

Plus, behind closed doors, you know Howard is all like.


... and that’s it. That’s all you need to know. Don’t look up any more information about the film. Go in and see it as blind as you can, and then come back here next week for my scene-by-scene breakdown review of Batman V Superman: Dawn Of Justice.

More:  10  Cloverfield Lane  Cloverfield  JJ Abrams  Dan Trachtenberg  Mary Elizabeth Winstead  John Goodman
Follow us on Twitter @The_Shiznit for more fun features, film reviews and occasional commentary on what the best type of crisps are.
We are using Patreon to cover our hosting fees. So please consider chucking a few digital pennies our way by clicking on this link. Thanks!