"We're reviving a cancelled undercover police program from the '80s and revamping it for modern times..." – if this neat, self-knowing gag from 21 Jump Street made you shoot guns into the air, then you're in for a treat with this sequel, a movie that spends more time playing off its own cash-in circumstances than trying to tell an original story. Which sounds awful, admittedly. But Jonah Hill's second visit to Jump Street pushes this meta theme so much more than before, resulting in a film that, despite deliberately following its predecessor's formula exactly, feels even more fresh and just as ludicrously funny.


Kicking off the film, a bodged drugs raid operation will wrong-foot you into thinking that you're in for a slightly disappointing stab at "more of the same" as it fails to be as funny as anything that comes after it. But when Nick Offerman's Deputy Chief Hardy steps in to say "Nobody gave a shit about the Jump Street reboot, but you got lucky... so now, this department has invested a lot of money to make sure Jump Street keeps going," then the film really starts firing on all silly-nders. 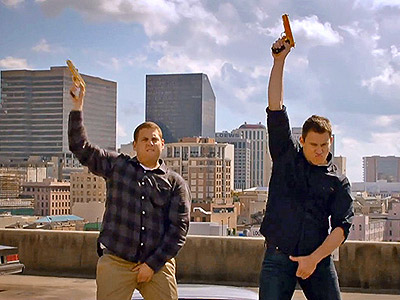 
From there we get a story that copies the first film's template extremely closely, only with added gags about how the case is exactly the same as the last one just with more budget in the bank. It's a through-line that could easily become quickly tiresome, but the script finds new ways to explore the joke so that it never feels lazy, and Hill and Tatum play it out with such conviction that the film never seems too irritatingly self-conscious. The concept may be alienating for those that haven't seen the first film, but for the rest of us it's a gag that keeps on giving.

But that's not to say that the film's comedy derives solely from its own awareness; there's plenty more here that sets the sequel apart from the film before. Most notably, the upgrade from high school allows for plenty of college-based scenarios making light of everything from studying useless subjects and hippy-minded seminar professors urging students to just 'be themselves' to The Walk Of Shame. 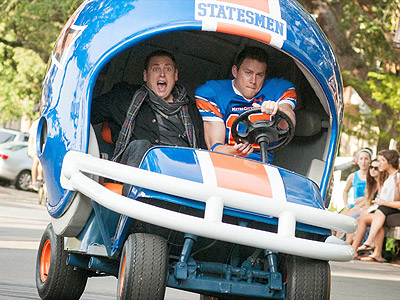 
Most of all though, the film just completely delivers on a neverending barrage of ridiculous moments and hilarious lines. Hill's slam poetry reading, an amazing drug hallucination sequence, stupid throwaway one-liners – including an excellent Cate Blanchett joke – there are so many standout moments, you'll want to rewatch the film immediately after it finishes just to try to remember them all.

And special mention goes to a sub-plot that causes unbearable friction between Schmidt and Ice Cube's Captain Dickson, leading to a horrendously inappropriate reaction from Jenko once he has a sudden (audible) ding of realisation. It contends with Jordan Belfort's ludes-fuelled meltdown in The Wolf Of Wall Street as the tear-streamingly funniest scene of the year so far.

Of all the film's triumphs though, the ending is arguably the most important. As the film reaches its conclusion and the humour is set to peter out, directors Phil Lord and Christopher Miller know exactly how to end on a huge high note. And so we get a sequence that extends well into the credits and will have you leaving the cinema hoping that, in the many years to come, you'll get to see 23, 24, 25 - fuck it - all the way up to 2121 Jump Street.

More:  22 Jump Street  21 Jump Street  Channing Tatum  Jonah Hill  Phil Lord  Christopher Miller
Follow us on Twitter @The_Shiznit for more fun features, film reviews and occasional commentary on what the best type of crisps are.
We are using Patreon to cover our hosting fees. So please consider chucking a few digital pennies our way by clicking on this link. Thanks!