So back in 2003, a poor Pennsylvanian pizza guy was forced to rob a bank with a bomb strapped around his neck. Needless to say, the end result wasn't pretty... it's on YouTube if you're into that kinda thing.


Skip forward a few years and we have a fast-paced, action packed 'bromantic' comedy that bears a striking, suspicious resemblance to that very event. But it's okay, because the filmmakers claim the similarities are purely coincidental, right down to the pizzas. And the bomb. And pretty much the whole set-up. But I guess its okay to laugh it off now. ROFL.

Reuniting with Zombieland director Ruben Fleischer, Jesse Eisenberg plays Nick, the pizza boy in question. Kidnapped by slackers, Dwayne (Danny McBride) and Travis (Nick Swardson), they strap a bomb to him and point him in the direction of the nearest bank. The reason: to spend the dough on a hitman to kill Dwayne's overbearing, hardass ex-military father (Fred Ward), inherit his lottery winnings and open a tanning salon/house of ill repute. As far as I'm aware, this wasn't the reason in real life. 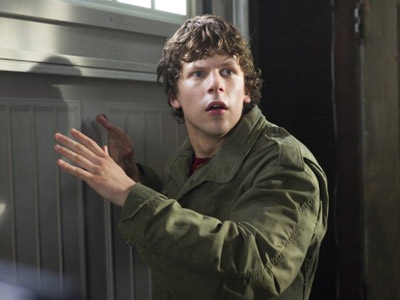 
So with the help of his reluctant best friend, Chet (Aziz Ansari), the world's least qualified criminals set about the bank job by way of police chases, car crashes, weed, flamethrowers, 'that's what she said' jokes, piss-takes and F-bombs, all while the clock ticks down. It's like the Farrelly's directing 24.

Stuck somewhere between Pineapple Express and Fargo, 30 Minutes gets by on a fine balance of high-octane action and a surprisingly sharp, quick-witted script. But with a confident, funny cast game for a laugh, it's no surprise that the dialogue feels ad-libbed and natural, with every clever insult and snide comment seemingly rolling off the tongue in a burst of spontaneity. Hoorah for banter!

If you've seen Danny McBride's TV show, Eastbound & Down, you'll know what to expect. Actually, scrap that. If you've seen any Danny McBride film you'll know what to expect. He might be banging that same worn-out, foul-mouthed, sexist drum, but as a borderline sociopathic criminal 'mastermind', he puts in a hilariously crude, rude and movie-stealing shift. Unfortunately, his partner in crime Nick Swardson has little to do other than dick about with a flamethrower, blow shit up and give Dwayne an Arsenio Hall haircut. 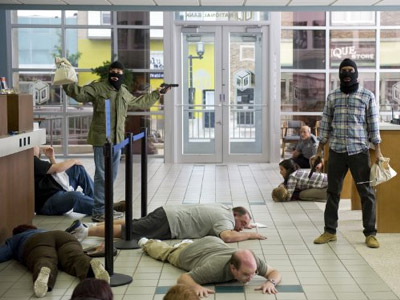 
Eisenberg, meanwhile, cracks out the neurosis in much the same way he did in Zombieland, even if it is tough to see past Mark Zuckerberg these days. Playing it reasonably straight compared to his co-stars is a smart move, and he still manages to get a poke in at Facebook's expense. But with that Oscar nomination to his name, the feeling is inevitable: perhaps he's above this kind of lowbrow comedy now.

Aziz Ansari, on the other hand, certainly is not, but in a good way. Still relatively unknown over here despite bit parts in Get Him To The Greek ("I woke up with glitter on my dick!") and Funny People ("Raaannnndyyyy!"), the stand-up makes the most of it as the friend caught in the middle and keeps the gags and insults flowing thick and fast right up to the end.

Much like the pizzas Nick delivers, you'll enjoy this buddy comedy immensely and be left satisfied for a short while. But like any good pizza, it's all gone too quickly (a slim 83 minutes with credits) and when it repeats on you later, it's not quite as tasty as you remembered.

More:  30 Minutes Or Less  Jesse Eisenberg  Ruben Fleischer  Danny McBride  Aziz Ansari  Nick Swardson
Follow us on Twitter @The_Shiznit for more fun features, film reviews and occasional commentary on what the best type of crisps are.
We are using Patreon to cover our hosting fees. So please consider chucking a few digital pennies our way by clicking on this link. Thanks!