"THIS! IS! SPARTA!" Or rather, "THIS! IS! THE! AEGEAN SEA!" as the next chapter of the pumped-up fight fest that was 300 moves the action to a fresh – and very wet – battlefield. Set during the same timeline of the suicidal Spartans' clash at the Hot Gates, director Noam Murro (with previous 300 helmer Zack Snyder producing) presents the slightly less-exciting but still fun Battle of Artemisium that takes place almost exclusively at sea. Caution: the first two rows may get wet.


Based once again on (as yet unreleased) source material by Frank Miller, there is plenty to enjoy in the way of mindless violence and lush comic-book visuals: there's still more claret splashing around than a night out with the Bullingdon Club and the kind of six packs that would make Beckham moan mournfully into a Krispy Kreme doughnut. But whilst 300 gets all up in your grill with lithe, muscular bodies and the flying heads of decapitated foes, Rise Of An Empire packs much less brute force than its predecessor.

In a helpful "Meanwhile, back in Athens" preamble narrated by Queen Gorgo (Lena Headey reprising her role from the original), we learn that while all that shit was going down with Leonidas and his crew at Thermopylae, Athenian general Themistocles (Sullivan Stapleton) was busy trying to convince the rest of Greece to unite and fell the ridiculously tall Xerxes and his fabulous gold hot pants once and for all.

And it's no easy task: if the Spartans are the Reebok Classic-wearing, neck-tattooed, gold-chained legends you see in Wetherspoons at 9.30am, then the Athenians are the ironic t-shirt-wearing hipsters, clutching a copy of London Fields and a soy-bean latte to their puny chests. These are a more civilised crew of fighters, made up of poets, sculptors and sensitive farmers who are a bit softer in the middle than their hewn-from-the-living-rock counterparts. Mercifully all the exposition and back-story is neatly packaged into the first 30 minutes, leaving plenty of room for the blood-soaked carnage we're champing at the bit for. 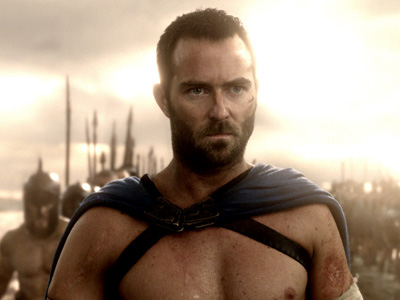 Athenian capes: they lift and separate!


And there is tonne upon tonne of carnage. Murro manages to put his own spin on Snyder's textbook 'speed-it-up-then-slow-it-down-again' style, following every beautiful swipe of an Athenian blade as it plunges into every Persian torso, but too often it feels a bit samey. While the battles at sea in particular are balls-out bigger, bolder and bloodier than before, on the whole they're largely repetitive and go on for way too long. The hulking wooden ships crash into each other with a satisfying crunch, but where before there were the narrow passages of Thermopylae, now we just have the jagged rocks of the Aegean Sea and a distinct case of déjà vu.

Moreover, Stapleton's commander can't quite fill the gaping hole left by Butler's Leonidas, opting to play it safe and serious with a thousand-yard stare that makes it look as though he's solving a particularly complex math problem. Stapleton also pulls off the amazing feat of playing a Greek with an English accent by way of the southern coast of Australia – it's like the turducken of accents and is slightly distracting. Everyone else also falls a bit short: the "One-eyed Moody" Dilios (David Wenham, also returning from the first film) continues to do his impression of Brian Blessed with a cold, and let's not even get into the confusing mix of Cockney and vague Eastern European extras aboard the Persian ships. Even Xerxes (Rodrigo Santoro), God-King and excellent score in Scrabble, comes off as a bit of a poser, preferring to sit back and chew on a chicken drumstick as his subjects slice and dice their way through Mother Greece.

With the menfolk coming up a bit short, it's up to the ladies to provide the real highlights of the film. There was plenty of criticism regarding the lack of distinctive female characters around Snyder's original, all of which can be put to ground by an amazing performance here by Eva Green. Chewing the scenery with such force you expect to see the green screen underneath, Green's Artemisia rocks up to steal the show as Xerxes' vengeful naval commander, who can flatten an entire fleet with one moody stare from her beautiful Gallic green eyes. Without a doubt, this is Green's film, filling that Butler-shaped hole as Stapleton's Themistocles fails to stir things up. Artemisia's origins story is a hundred times more enjoyable than Xerxes' transformation from prince to God-Thing, which basically amounts to him taking a quick dip in a pool and coming out looking like Grace Jones. However, even Green falls victim to the Silly Voice Brigade, occasionally growling so deep you spend a lot of time willing her to cough. 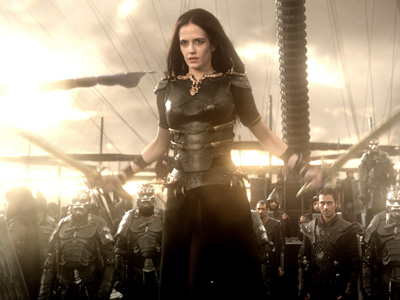 
In a testament to Green's prowess, any moment without her on screen is a real dull note. The father and son storyline between Scyllias (Callum Mulvey) and Calisto (Skins' Jack O'Connell) feels tacked on in order to give the film some heart. O'Connell is vastly underused here, jumping around enthusiastically waving his sword about, only to get told off by his dad for showing off. What O'Connell may lack in physical stature he can make up with in pure, unadulterated rage and it's a shame he is never given the chance to go fully berserker and tear his way through a load of Persians.

Just in case you were worried it's all fighting and feelings, seeing as this is a 300 film there are of course sexy times too. During the fairly weak middle portion, Artemisia seduces a reluctant Themistocles on board her ship in an ultimate display of power play. It's a seduction which quickly turns into a hate-fuck that will change the way couples argue over who will do the washing up forever more. It's as uncomfortable to watch as you'd expect, as for all her moaning and writhing Artemisia may as well be shagging the kitchen table - Themistocles is THAT wooden. Unsatisfying as their sexual encounter may have been, it does allow Green to later spit out one of the best lines from the film, "You fight harder than you fuck", sparing no thought for Themistocles' poor feelings. Seriously though, fuck that guy.

For a film that's trying to outdo its predecessor in every way possible, Rise falls a bit short. It still looks glorious, retaining that distinctive chromatic style and gloomy colour palette for that essential comic-book look, but much like the abs of the Athenian hordes this still is very much a slimmed down affair. The fact that battle-scarred Spartans who have been training ALL THEIR LIVES can't defeat the Persian army but a bunch of art-school wankers can makes you feel as though you've been sold slightly short. You can watch as many rippling abs in action as you like, but the biggest muscle is the BRAIN, see? You may not want to come away wanting to start your own army this time around, but at least you'll have the amazing insult, "Shut your cockhole!" should anyone try to mug you off.

More:  300 Rise Of An Empire  300  Zack Snyder  Noam Murro  Sullivan Stapleton  Eva Green  Lena Headey
Follow us on Twitter @The_Shiznit for more fun features, film reviews and occasional commentary on what the best type of crisps are.
We are using Patreon to cover our hosting fees. So please consider chucking a few digital pennies our way by clicking on this link. Thanks!