Mandy Moore is on holiday and she's going to do some shark cage diving, despite it being the most nakedly awful idea two skeevy Mexican guys you'd just met in a bar could propose. She is the sort of person who is persuaded by friends to go to Glastonbury, knowing she will spend every minute unable to enjoy it for worrying where her tent is and whether her phone is sufficiently charged, but goes along with the whole grim jamboree because not to would mark her out as "no fun". She is, in short, eminently sensible and exactly like me, except that she actually makes it out of the hotel in the morning, rather than sitting hungover in her pants eating room-service waffles and watching Friends on Mexican TV.


The accusation of being insufficiently spontaneous is her motivation for more or less everything she does in 47 Meters Down, and it marks an odd approach to character development. Ordinarily, whenever someone in a film does something we know is out of character because someone else talks them into it, the lesson they'll go on to learn is that they should always be themselves and be comfortable with that. Not so much here. The journey her Lisa is on is one where fundamentally changing her nature to fit in with others' expectations is the right thing to do.

"Don't worry, I know everything about the sea. You think they let just anyone wear bandanas like this?"


Still, when you're faced with the choice of drowning or being eaten by sharks, what's the difference? Once Lisa and her sister (Claire Holt) are down there, what had been a fairly flaccid affair gets good and tense. What's best about it is Johannes Roberts' choice to keep the vast majority of his film underwater: once they're down there, we're down there with them, and there's no cutting back to the surface.

This has two pleasing effects. One, it maintains the claustrophobic atmosphere, putting us in the sisters' flippers so we feel as trapped as they do, and two, it allows our paranoia to fester a little more: are the two Mexican guys and Matthew Modine's Captain Taylor keeping them down there deliberately? We were given hints at the start that they were somehow disreputable, and though Taylor's voice over the radio sounds sincere as he insists he's doing everything he can to bring them back up to the surface, we can't be sure. 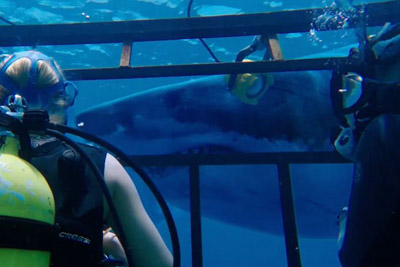 "Good afternoon, Gregory Sharkington's the name, just checking if anyone's got any limbs they need biting? No? Then I'll bid you good day."


It is very exposition-heavy, with Taylor more or less reading out the NHS Choices webpage about the bends and how to avoid it over the radio. And the pair give us the benefit of their own narration ("My air's going to run out! Got to get to the spare oxygen tank!") to keep things moving along, but none of it grates too much. It's a simple enough story that keeps on putting little obstacles in the characters' way to halt their progress, and the solution always begets another problem: they're too far down to hear Taylor on the radio so have to leave the cage and swim up, but that puts them in sharks' way, and so on.

All of this is pretty gripping overall, but this sort of thing relies on character. The motivation we're given at the start for Lisa to ditch her natural reserve, which is to show her boyfriend she's not boring, isn't convincing, and also is a reason we know to be ill-considered. It matters less once you're in the drink with the sharks circling, because the tension takes over quite effectively, but you can't shake the feeling that going down there in the first place isn't something her character would do.

More:  47 Metres Down  Johannes Roberts  Mandy Moore  Sharks  Claire Holt  Chris Johnson  Yani Gellman  Santiago Segura  Matthew Modine
Follow us on Twitter @The_Shiznit for more fun features, film reviews and occasional commentary on what the best type of crisps are.
We are using Patreon to cover our hosting fees. So please consider chucking a few digital pennies our way by clicking on this link. Thanks!