So I saw Battle Los Angeles (now correctly de-colonised, for all you punctuation pedants) last week but the ringing in my ears only just stopped. Guess I'd better do a blog post on it then.

Those capitals are correct: this is DIALOGUE. Bar the first 20 minutes, all words are spoken at decibels equivalent to that of a pnuematic drill or light aircraft over the ear-rape that is part and parcel of an alien invasion.

That'd be okay if the script didn't feel like it was lifted from pre-recorded lines uttered by NPC teammates from Call Of Duty. And fuck those guys. I'll shoot whoever I damn well want, Ramirez. 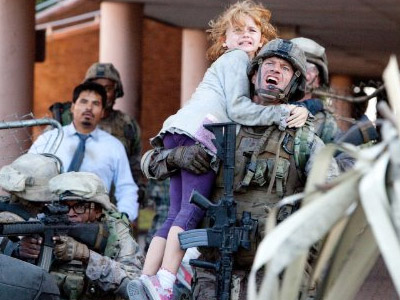 The point here was clearly to tap into the same vein as war movies like Black Hawk Down and Saving Private Ryan - where battle is fast, disorientating and confusing. Mission accomplished, I guess.

Most sequences involve taking point and pushing forward (actual military manoeuvres, probably) rather than, say, hacking an alien computer or flying a plane up a spaceship's ringpiece. Not sure that excuses the shakycam in the pre-war scenes though. Maybe the director was jogging. 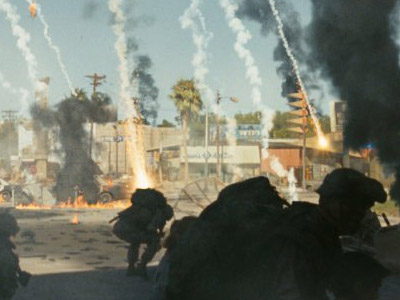 Just the worst, most cliché-ridden bunch of faceless cannon fodder you've ever had the misfortune to watch die. The opening scenes of the movie take care to give every character a humourous scene that humanises them. They're LOLing you into a false sense of security, see?

Obviously though, you want to see alien ships taking giant laser shits on Earth, so this is reduced to: young gun with pregnant wife; grieving brother; Michelle Rodriguez; untested rookie; black guy who wears glasses; engaged corpse-in-waiting; and Aaron Eckhart, the Sarge with the big secret. Here's a hint, screenwriters: NOBODY FUCKING CARES. 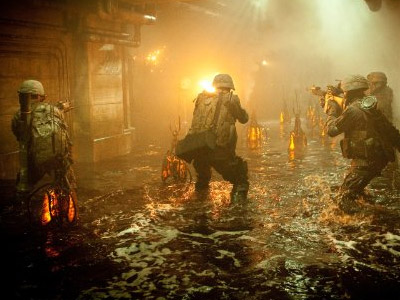 "Jesus Ramirez, would you stop talking about your fucking dead brother?"

I particularly liked Bridget Moynahan's response to when Eckhart drags in an alien casualty for autopsy: "Maybe I can help... I'm a veterinarian." At least, I assume that was a joke. 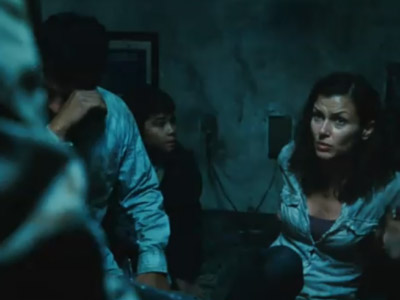 "I'll let you know if they have worms.'"

There are some cool ideas in Battle Los Angeles. For one, there's not really an alien mothership - the crafts you see are all unmanned drones that can link up together to form bigger ships. That's kind of cool. It's a bit of a shame when you see them in the flesh, because they're a bit naff - just giant sacks of mucus in robo-armour. Sergeant Eckhart discovers in the autopsy scene mentioned above that their weak spot is "slightly to the right of their heart" - who would have ever have thought to shoot there!

The way they've been animated (and the way they're subsequently dispatched in great numbers) reminded me of the crappy little chicken-bots from The Phantom Menace: precise but disposable. As armoured bipeds, they move like humans - they even drag their wounded from the battlefield and can be seen loading their giant cannons. I've never seen that before either, but I think it's probably because it's a bit crap. 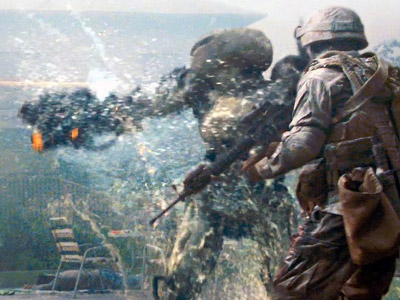 I don't want to spoiler alert you, but Team America wins. Shocking, I know. Yet again, an apparently invincible force that's capable of mass transit space travel boasting otherworldy technology of incredible force is beaten by a ragtag team of lead-shifting grunts with letters for their wives tucked in their back pockets. (*salutes*)

Once they've found the alien's huge, vulnerable, obvious weak spot and destroyed it (there's actually smaller, more annoying drones that they have to kill first - my thumbs kept twitching like I was supposed to be strafing the characters myself) there's even an exact rip of the scene in Independence Day, where Chief Army McMilitary yells, "Get on the phone and tell the rest of the world to take these bastards down!" Which kind of makes the proposed franchise a bit of a let-down before it's even started, doesn't it? 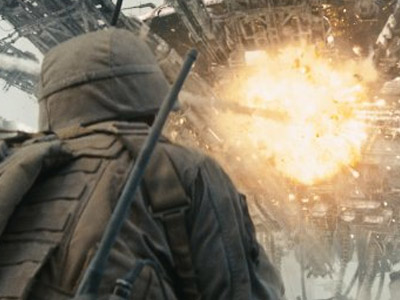 You can do better. 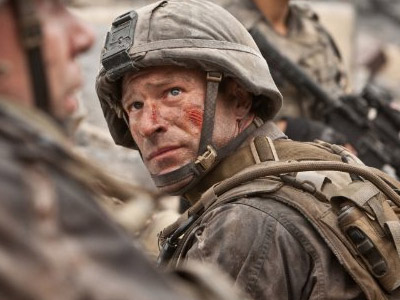 You've earned that chimple. Now make it proud.
More:  Battle Los Angeles  Battle Los Angeles  Aaron Eckhart
Follow us on Twitter @The_Shiznit for more fun features, film reviews and occasional commentary on what the best type of crisps are.
We are using Patreon to cover our hosting fees. So please consider chucking a few digital pennies our way by clicking on this link. Thanks!