A Field In England

I don't like mushrooms. Never have. I don't trust 'em. They taste weird, they look weird, they've got the texture of an internal organ and they're responsible for one of the worst puns ever. I therefore approached Ben Wheatley's new film, A Field In England, as some kind of aversion therapy. Perhaps the mushroom consumption for which the film is already known would persuade me that it's possible to eat a fungus and still have a good time? Sadly it didn't quite work out that way. I had a good time, but now not only am I terrified of mushrooms, I've also developed an unhealthy fear of fields, tents and Michael Smiley.


Let's cut to the chase: A Field In England is bonkers. It's barking, howling, screaming-at-the-moon mad, and on the surface it makes less sense than a bucket of camels. Narrative coherence is a stranger to it, helpful explanations of what's going on are nowhere to be found and characters talk funny like in the olden days. It's probably Ben Wheatley's least accessible film. But it's also funny, unsettling and thought-provoking; an experimental headfuck that might alienate some, but I promise you this: you will never, ever forget it.

Set in, obvs, a field in England, it's a crackers episode in English Civil War history that I'm fairly sure isn't included in the textbooks. Reece Shearsmith is Whitehead, a scholar and a coward, desperate to flee the conflict and find O'Neil (a never-more-intimidating Michael Smiley), a charlatan alchemist who's legged it with some of Whitehead's master's vital papers. Who is Whitehead's master? We don't know. Who is O'Neil? Not sure. But later references to what kind of person O'Neil might be lend the tale an interesting possible interpretation. Whitehead reluctantly teams up with two more deserters who, like most good Englishmen, are trying to find a pub, and the treacherous Cutler, aide to O'Neil and mushroom chef extraordinaire. 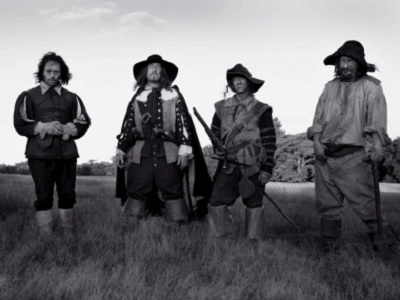 These people may all be figments of your imagination.


This is the point at which further synopsis becomes fruitless. The fungal feast is the catalyst for an hour of insanity which includes diseased cocks, tent-based torture, reincarnation and some baffling tableaux vivants staged by the characters which are begging to be rendered in the style of some great 17th century painter and turned into a tumblr blog. Metaphors become increasingly nebulous, characters experience mental trips that defy description and, frankly, so do we. One sequence is so batshit crazy that you'll still feel like you're seeing it 24 hours later.

All this madness would be a waste of an audience's time and patience were it not backed up by Wheatley's confident filmmaking. A Field In England is shot in staggeringly beautiful monochrome, with achingly gorgeous close-ups and slow-motion sequences which induce wonder and terror in equal measure. Wheatley's wife Amy Jump's script crackles with expertly crafted dialogue, while James Williams' score injects menace and a sense of the period which, married with Emma Fryer's costumes (swishing capes a speciality), is never less than convincing. The performances, too, are flawless: Shearsmith gets to pull some unbelievable faces, while Smiley's own mush isn't so much loved by the camera as inappropriately fondled. 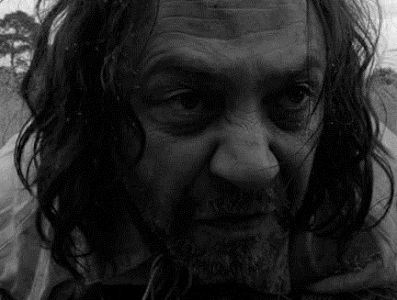 
So what's it all about? It hardly matters. You can search for allegory if you like (the field itself is mysteriously calm considering it's right next door to a battlefield; Whitehead claims "whilst we live in fear of hell, we have it" - make of that what you will) but A Field In England is a sensory experience as much as anything. Original and daring, it's the 2001: A Space Odyssey of Civil War movies, destined for stoner cultdom and its own unique place in cinema. It's also very, very English: nowhere else in the world could this film be made - and you have to wonder if anyone else but Ben Wheatley could have made it. His increasingly unpredictable career has taken another surprising turn, and he's officially now one of the world's most singular directors. And on the evidence of this shroom-fuelled marvel, I bet he's also a fungi to be with.

More:  A Field In England  Ben Wheatley  Reece Shearsmith  Michael Smiley  Julian Barratt  Richard Glover  Ryan Pope  Peter Ferdinando
Follow us on Twitter @The_Shiznit for more fun features, film reviews and occasional commentary on what the best type of crisps are.
We are using Patreon to cover our hosting fees. So please consider chucking a few digital pennies our way by clicking on this link. Thanks!