A Good Day To Die Hard

The theory goes that the larger you make John McClane's playground, the less fun there is to be had. Since the original Die Hard, we've gone from a building to an airport to a city to the entire Eastern Seaboard, and now with A Good Day To Die Hard, John McClane ventures to Russia, where more fish out of water jokes than ever await. The law of diminishing returns has largely held true, except this fifth Die Hard movie feels slightly less expansive than the last, and is significantly less silly. It's no closer a relation to the 1988 original, and McClane is more of an indestructible Terminator than ever, but you just can't stay mad at it.


Director John Moore makes it easy to care less, hitting the accelerator and tearing off even further in the wrong direction with a spectacular car chase that crushes you into submission: Die Hard is now more about large-scale action than small-scale tension and interaction. Once you're on board with that fact, A Good Day To Die Hard stops being an affront to the franchise and starts being an above-average action movie in its own right – punchy, occasionally witty and not bad looking. Refuse to relent and you'll struggle to give a shit - this is as much a real Die Hard movie as that Jean-Claude Van Damme movie set in the ice rink was a real Die Hard movie. 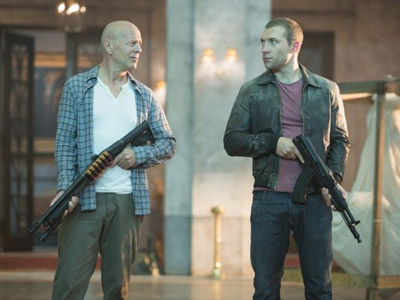 I think it was called 'Terrorists On Ice'.


Willis holds it together, hangdog expression and squinty smile still in effect, now ably supported by Jai Courtney as John McClane Jr, giving the old man a run for his money in the ability to fill out a t-shirt while looking utterly unphased by everything. Each Die Hard movie is only as good as its villain, and Good Day is tragically Gruber-less, meaning the identikit Russians don't put up much resistance.

Radivoje Bukvic's bad guy Alik does have a few cool quirks, like admitting "I could have been a dancer", but he always defaults into Cackling Maniac Who Takes Too Long To Do Everything mode. His henchmen aren't all that, either – there's a guy who looks like Paul from Tekken, a dude who looks like an 1920s strongman complete with bald head and moustache, and a sexy lady who looks like Jessica Biel if she got stuck in a perma-pout.

The biggest problem is director John Moore's insistence on putting McClane through such hideous torture – injuries that would kill a man twice as athletic and half his age. The amount of logic farts in the script that are engineered solely to have McClane face down another scene of certain death defies belief: at one point, John and Jack decide to jump OUT of a top-floor window when they find themselves under heavy chopper fire. As opposed to running further inside the building to safety. Every bone-crunching injury McClane endures ratchets the tension down another notch. Remember when a room full of broken glass was almost his downfall? Now the guy is picking fights with choppers for fun. 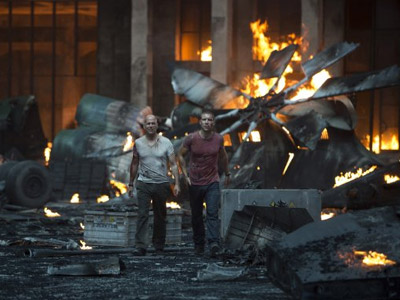 It looked at him funny.


A Good Day To Die Hard isn't half as funny as you might expect – there's only one joke ("I'm on vacation!") and it's used three times; the rest of the film's 'humourous content' is McClane spouting glib one-liners at unimpressed Russians. The forced banter between man and boy never really feels like it fits, but as far as action hero companions go, Jai Courtney is preferable to Justin Long, if not Samuel L Jackson. Admittedly, there is one great one-liner at the climax of the movie, right before McClane pulls a stunt so ingenious it almost redeems the entire last act, but before long, he's being tossed around like a ragdoll again and you remember that absolutely nothing is at stake, because John McClane can't die hard – not if they still want to make Die Hards 6, 7 and 8.

Skip Woods' script does at least explain why John and son don't just give up and go home ("This is what we do"), which is about a close as you're going to get to a reason why the same shit has happened to the same guy five times. If you're expecting A Good Day To Die Hard to live up to the impossibly high standards set by the original, then it was always going to fail. In that case, may I make a suggestion? Go and watch the original Die Hard. Newsflash: it's still awesome. This will do in the meantime: not a good day exactly, but not a goodnight to Die Hard either.

More:  Die Hard Week  A Good Day To Die Hard  John Moore  Bruce Willis  Jai Courtney
Follow us on Twitter @The_Shiznit for more fun features, film reviews and occasional commentary on what the best type of crisps are.
We are using Patreon to cover our hosting fees. So please consider chucking a few digital pennies our way by clicking on this link. Thanks!