A Walk Among The Tombstones

There comes a point where you just have to say, OK: we've got enough single-minded vigilante killing machines in cinema. We don't need another. That point for me was the three weeks between seeing A Walk Among The Tombstones and The Equalizer, more of which next week. Liam Neeson's latest is much like a lot of his other post-Taken output: you don't need it particularly, but it's there and it does what it's supposed to.


You know the drill: Neeson is Matthew Scudder, ex-cop, killed some people on the job and got out of the force, private detective, bad people do bad things, he tries to catch them but maybe he's bad too, and so on. Not that there aren't any ideas in it; it's just that it's impossible to follow most of them to their source and figure out what they were supposed to achieve. 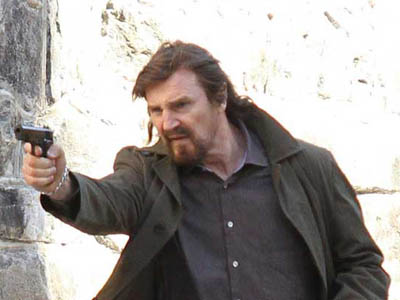 Liam Neeson, pictured here pointing a gun at someone. Stay tuned to find out what he's doing in the next picture.


Take, for example, the fact that it makes a big deal of being set around the turn of the Millennium amid all the Y2K panic. Millennial angst is a deliberate theme, to be sure, but it's not followed through, doesn't influence the characters' thinking or actions as far as I could see, and instead just sort of hangs around in the background, mentioned here and there in newspaper headlines and graffiti. I suppose the pre-digital ubiquity period might make more credible Scudder's aversion to technology, but there's no way the whole setting was devised just to achieve that.

With Scudder a recovering alcoholic there's also an attempt at thematic overtures through the 12-step programme, read out slowly in voiceover over a third act setpiece. The 12 steps, if you don't know, are pretty Goddy ("I admit I am powerless over alcohol - that my life has become unmanageable. I believe that a power greater than myself can restore me to sanity. I make the decision to turn my will and my life over to the care of God as I understand Him...") and the idea seems to be trying to resonate through invoking religious imagery to achieve some general gravitas. Never mind that Scudder seems to have had it under control for years so it doesn't feel all that significant. 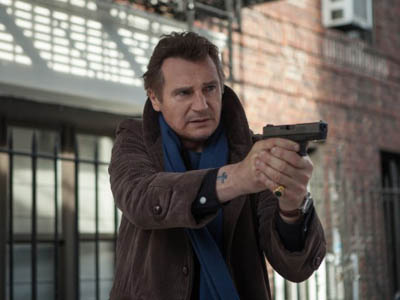 
Try not to think about what the themes are supposed to achieve, though, and you find things to like. Downton's Dan Stevens convinces as the ruthless drug dealer whose wife's been kidnapped, suddenly powerless for the first time and playing the shift in status very well. David Harbour and Adam David Thompson make assuredly creepy villains in a van. There's very good use made of a washed-out, dreary colour palette, only getting more crisp in the night-time, where Scudder feels most at home and clear of thought. Liam Neeson's ... well, he's Liam Neeson.

Mid-budget suspense thrillers definitely have a place, and in my experience that's where a lot of the best drama comes from. There's nothing wrong with their generic aspects being used for structural foundation: it's sort of what makes them them, if you like. But you need a few coherent ideas on top of that structure to really stake out a film's territory, and there aren't enough here.

More:  A Walk Among The Tombstones  Scott Frank  Liam Neeson  Dan Stevens  David Harbour  Adam David Thompson  Eric Nelsen  Laura Birn  Brian Astro Bradley  Lafur Darri Lafsson
Follow us on Twitter @The_Shiznit for more fun features, film reviews and occasional commentary on what the best type of crisps are.
We are using Patreon to cover our hosting fees. So please consider chucking a few digital pennies our way by clicking on this link. Thanks!