Well, ain't them? No, I don't understand the title any more than you do. But over the few weeks since I saw this, the advertising for Alpha Papa has influenced me so much that every time I think of it, I imagine Alan Partridge saying the title as an expression of weary frustration. "Guhhhhh, ain't them bodies saints?" But Partridgian asides aside, here's an independent film that paints an engaging picture of love torn asunder on a Southern-fried canvas. Cashback.


OK, I looked it up. The title comes from an old country song. Apt, really: Ain't Them Bodies Saints feels a lot like a cinematic adaptation of some tragic George Jones song about an outlaw on the run, trying to get back to his girl and his daughter. It's The Ballad of Bob Muldoon (Casey Affleck), who took the rap for his pregnant girlfriend Ruth (Rooney Mara) after she shot and wounded a cop. Once he's escaped from jail, he sets out back to Ruth and the daughter he's never seen. 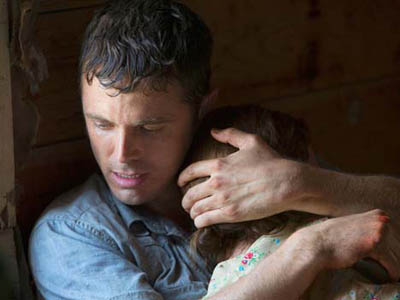 "Don't worry, my brother's Batman. He'll save us."


This isn't The Fugitive. The Pursuit of Bob Muldoon isn't the point: desperate car chases, shootouts and FBI briefings aren't why we're here. Mainly we concentrate on the agonised wait for both parties until they can see each other again. Bob writes Ruth letters, unable to give away his location, and gets as close to her as he can without being caught, which only increases the tension of this brutal waiting game. There's an idealised picture of her in Bob's mind, and the dreamlike way writer-director David Lowery shoots her - putting her in billowy dresses, framing close-ups of her face as the sunlight through the window hits us in the eyes, and so on - emphasises this.

The cinematography reminds you of similarly languid depictions of the South, like this year's Mud: all hazy greens and browns, and a sun permanently in descent chopping through the trees and blinding you in flashes. And there's an ageless quality to it, partly because of the small-town Texas setting. I was surprised to read afterwards that the film is set in the 1970s, because the clothes don't seem to suggest it, although the absence of technology does, on reflection. (The WhatsApp Messages of Bob Muldoon doesn't really strike the same note.) The score is percussed by handclaps and footsteps, as if recorded lazily in a field. 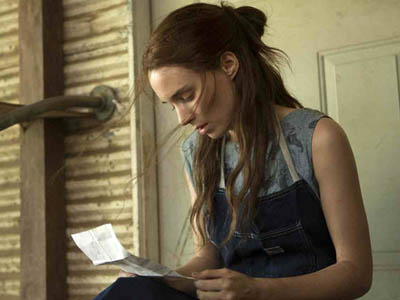 "Dear Rooney. Now that the transfer window is closed, I hope you will finally commit your future to Manchester United. Yours, David Moyes." (*scrunches up letter*)


As Bob draws closer Patrick (Ben Foster), the cop whom Ruth shot, begins to be drawn to her and she wavers a little in her resolve to wait for Bob. Here's a chance of the stability a fugitive can't give her, and it's hard to resist. But here's where all three actors earn their money. Mara's defiant duty towards her boyfriend begins to melt and we see it in her face; Foster begins creepily to turn up and check on her, but convinces you by the end he's a decent man; and Affleck is full of quiet longing and desperation. The couple share very few scenes, but the strength of their bond is never in doubt.

That's The Ballad of Bob Muldoon. With bits left out so it doesn't spoil it for you, obviously. No one writes songs like that any more, but they seem to work as films all right. Next week, the movie of how Billie Joe McAllister jumped off the Tallahatchie Bridge. (It's pretty short.)

More:  Aint Them Bodies Saints  David Lowery  Rooney Mara  Casey Affleck  Ben Foster  Keith Carradine  Nate Parker
Follow us on Twitter @The_Shiznit for more fun features, film reviews and occasional commentary on what the best type of crisps are.
We are using Patreon to cover our hosting fees. So please consider chucking a few digital pennies our way by clicking on this link. Thanks!