Steve Coogan has been Being Alan Partridge for over 20 years. Over two decades, Norwich's finest broadcaster has read the sport on Radio 2, manned the sports desk on The Day Today, transferred his skill-set to chat in his very own talk show, traded his fame for a sitcom in a travel tavern and broadcast his unique stylings ("equidistant between chit-chat and analysis" - Ross Kemp) on the world wide web. Now, Alan Partridge is welcomed to big school: his very own feature film. Alpha Papa is clearly not the best fit for a character for whom even the small screen is too big, but it is as funny as the format allows. For a character who has survived 20 years on every broadcasting medium under the sun, it's a remarkable feat that Partridge has never outstayed his welcome.


Coogan, together with creator Armando Iannucci and writers Peter Baynham and Neil & Rob Gibbons, understand the essence of Alan too well to make his feature debut a folly. Parochialism is as big a part of Partridge as his hair or his clothes or his catchphrase (long since dropped: who was the last TV character who managed that?) so taking him out of his comfort zone - or, in Partridgese, his "arena of conflict" - would be doing him a disservice. No one needs to see Alan in America: he can't even stand London. The closest Alpha Papa gets to Hollywood is having Partridge live out his hero fantasies during a radio station siege, but even that feels right for the character; a man so well versed in action cinema he knows the opening credits to The Spy Who Loved Me off by heart. 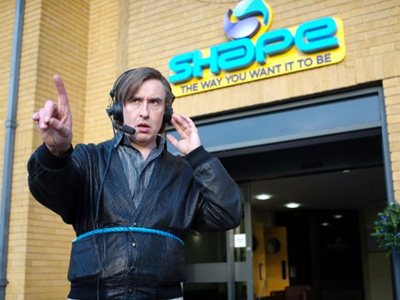 Also all the lyrics to Roachford's 'Cuddly Toy'.


Crucially, the events of Alpha Papa feel feasible: they had to be interesting enough to sustain 90 minutes of comedy, but also in Partridge's wheelhouse - it's just believable enough that this could be the most important thing to ever happen to Alan. And so, as Colm Meaney's decrepit DJ Pat chooses to take up arms rather than take a trip to the big radio station in the sky, Alan jumps at the chance to play North Norfolk negotiator; defusing a dangerous situation, yes, but far more importantly, raising his media profile. Alan can't be Bruce Willis, but he can be Al Pacino in Dog Day Afternoon. Minus the ladyboy.

With the 'sit' established, the 'com' pretty much takes takes care of itself. Partridge is at his best when his back is against the wall, and the siege gives him plenty of opportunities to reveal new depths of cowardliness (on suggesting Pat's sacking to the station's new owners: "I didn't kill him, Lynn, it was assisted suicide. I just flew him to Switzerland"). However, the relative scale of the film does not always result in the funniest scenes; often it's Alan's bread and butter i.e. mindless chat with Norwich nutters that generates the most titters.

One late scene, in which Alan attempts to instruct a police officer in the correct use of a bullhorn, is - to paraphrase Partridge - abso-bloody-exactly what the character should be doing: focusing on petty grievances and mild irritations even in the face of life-changing events. It's Alan's foot-in-mouth syndrome that makes him so worth watching ("Is that your wife? She's got such... brown hair"); giving him a gun does little to change that. 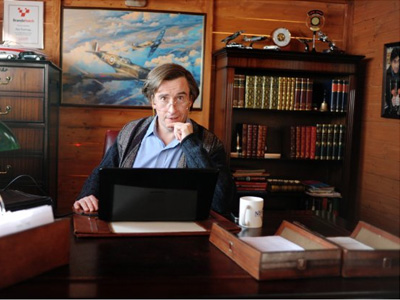 
After an hour, the feature film format does occasionally seem to be too overwhelming for Alan - particularly as support from the likes of Geordie pal Michael and Sidekick Simon is minimal - and as his adventures ultimately take him on the road, you may yearn for him to be back in the cosy studios of North Norfolk Digital, yakking with Jill from Holt about which 'monger' is the worst: iron, fish, rumour or war?

Yet predictably, just when you start to think the task is beyond him, Alan redeems himself - usually with a perfectly timed one-liner (the Osama bin Laden gag near the end is one of Partridge's best, maybe ever). Like every sitcom, come the closing credits the status quo has resumed: Partridge is back on the air, having learned very little and achieved nothing, except perhaps for one thing. He got his movie out of his system.

More:  Alan Partridge Alpha Papa  Declan Lowney  Steve Coogan  Colm Meaney
Follow us on Twitter @The_Shiznit for more fun features, film reviews and occasional commentary on what the best type of crisps are.
We are using Patreon to cover our hosting fees. So please consider chucking a few digital pennies our way by clicking on this link. Thanks!