Brad Pitt, I have decided, is too handsome. My reaction to more or less anything he does on screen these days is instinctively: "Yeah, but this character wouldn't look like that. No one does." In Allied, which is fine and all that but a bit daft, he marries Marion Cotillard while looking amazing then grows suspicious she is a spy while looking amazing, and I can't shake the feeling that all of this looking amazing is part of a comfort zone out of which he's unprepared to step.


If you take the idea that acting is about the representation of truth, then part of that truth must be that there are times we don't look our best. Given that films tend to be about stressful events in the characters' lives, you'd assume that quite a few of those times would be shown on screen. I don't know why, but this makes me think of this scene in Jersey Girl.

Now, Ben Affleck is a great-looking bloke and presumably knows it. But in this scene in particular he looks an utter berk, and he's prepared to, because he knows that men just presented with the news that they are to become a father might be so overjoyed that they'd pull a facial expression that makes them look an utter berk.

Brad Pitt wouldn't. He'd grin a bit, then maybe look wistfully into the middle distance and narrow his eyes enigmatically. He's like one of those people you see doing the same pose over and over on Facebook, because they've figured out it's the most reliable one for making them look good in photos.

Once you think of him this way, watch what he does: parachutes serenely into Morocco without a hair out of place, strides confidently into a bar in Casablanca and finds Cotillard, his undercover wife, an agent for the French resistance with whom he's about to get into the killin'-Nazi business. They fall in love and head for a quieter life in Hampstead, where his superiors tell him she's a spy for ze Germans. And there are definite high points in this, like the detailed production design; Cotillard's performance, which throws in just enough intrigue and misdirection to keep you guessing; and Jared Harris as the sort of enjoyably peppery old colonel he can do in his sleep.

But there are problems, too, like a mish-mash of tones that can see a sentimentally Zemeckian gush of Cast Away-like strings as the pair kiss or cradle their child one minute, then a head explode in a gunfight the next. And like the oddly profligate decision to hire an actor as good as Lizzy Caplan to be Brad's sister in two or three scenes which offer no side-plot. Why she, also a Canadian, is conveniently living round the corner in London is unexplained. All her character does, in fact, is distract you by making you wonder how realistic it is that she's openly in a same-sex relationship in 1940s London at which no one bats an eyelid. And like Pitt's accent when speaking French, which is bad enough that they should've made more of a joke out of it. 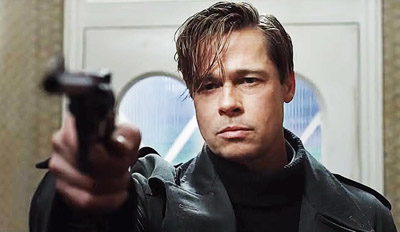 "Any last words, Nazi? No, no, about my coat. What do you think, collar up, collar down?"


Pitt has now done a pretty full spread of World War Two films within a short space of time: stylised and (brilliantly) comedic in Inglourious Basterds, brutal in Fury and now more syrupy here. (Allied is intended as more of a suspense thriller, I suppose, but tension, while not absent, is not its defining feature.) Trouble is, Brad's not that well equipped to do syrupy, because he is not a particularly expressive actor – at least not any more – and so Robert Zemeckis's constant close-ups of his lovely mug have a dampening effect.

He could try a bit harder, or maybe he's just content to settle into some easier roles for a few years, which is fair enough. As a male A-lister he has the luxury of reliably regular starring roles while he gets older and a bit less easily saleable. As a man who never coasted early in his career when he could've got away with it, he now seems to me more a movie star than a movie actor, and too often the point of him is to be on the poster rather than in the film.

What I'm saying is, I really wish I looked like Brad Pitt.

More:  Allied  Robert Zemeckis  Brad Pitt  Marion Cotillard  Jared Harris  Lizzy Caplan  August Diehl  Matthew Goode
Follow us on Twitter @The_Shiznit for more fun features, film reviews and occasional commentary on what the best type of crisps are.
We are using Patreon to cover our hosting fees. So please consider chucking a few digital pennies our way by clicking on this link. Thanks!