American Hustle does not fuck about setting out its stall. Its first glorious image is of a pudgy Christian Bale in a bathroom mirror, his face sheltering beneath a jacked-up haystack of atrocious seventies hair, methodically and painstakingly attempting to sculpt his ludicrous combover into a presentable form. It's immediately hilarious and tragic, and tells us that what we're about to watch is concerned with appearances, deceit, aspiration, unfathomable fashion choices and hair. Lots of hair.


It's New York, 1978, and apparently - as we're told by a caption - "some of this actually happened". It's a reference to the FBI's 'Abscam' operation, in which a number of US politicians and significant public figures were busted for corruption. Director David O. Russell and writer Eric Warren Singer use Abscam as a clothes rail on which to hang an entire wardrobe's worth of characters so richly drawn and garishly dressed that it's easy to lose the plot that's supporting them. Not that it matters: these characters, played by these actors, in these costumes, could stand around talking about porridge for two hours and the film would still be showered with award nominations. 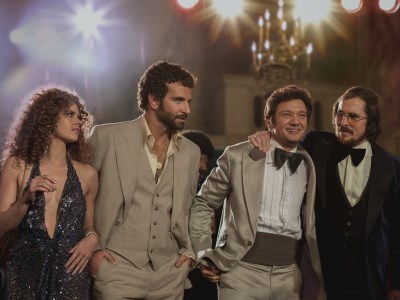 "Stick with us Jeremy, and you'll have all the Ready Brek you'll ever need"


Bale, as conman Irving Rosenfeld, is the film's heart. Rosenfeld isn't a stereotypical dirty rotten scoundrel; he's neither Michael Caine nor Steve Martin, but a complex mess of smarts, ambition and insecurity which few actors can convey with Bale's efficiency. He channels dangerous levels of De Niro in the first act, but with good reason; more on that later. Rosenfeld's girlfriend and partner in crime, Sydney (Amy Adams), is the de facto femme fatale, all cleavage and lies, while Jennifer Lawrence plays his firecracker wife Rosalyn, "the Picasso of passive aggressive karate". Both women are as dangerous as they are gorgeous, but in different ways, and both prove for the bazillionth time that they're among Hollywood's brightest young talent right now.

Meanwhile Bradley Cooper, as FBI upstart Richie DiMaso, and Jeremy Renner, as dodgy-dealing New Jersey mayor Carmine Polito, are equally impressive despite - or perhaps because of - the indignities forced on them by their characters' hairdos: Cooper's jheri curls resemble a helmet of springs, while Renner's preposterous pompadour befits the strutting peacock of his character. 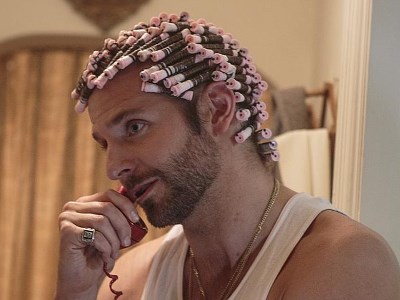 
The American hustle in question concerns DiMaso's recruitment of Irving and Sydney to help him take down Polito, who's using mob influence to push through gambling laws in Atlantic City. Sounds straightforward enough, but given that you're never sure who's playing who off against who - especially once wild card Rosalyn gets involved - there's plenty here to keep you on your toes. As the layers of cons pile up, it soon becomes clear that pretty much everyone involved is out of their depth, leading to some refreshingly original - if a little protracted - storytelling. It's also surprisingly funny: it's easy to laugh at bell-bottoms and huge collars on sexy Hollywood stars, but the point at which you stop chuckling at the costumes and start responding to the actual comedy is indistinct.

What's blindingly clear, though, is that David O. Russell is a huge fan of Martin Scorsese, and American Hustle is surely as close as he'll get to a GoodFellas / Casino homage: long, elaborate Steadicam moves weave through late-'70s New York and around characters clad in ill-gotten glamour discussing the intricacies of food preparation or complaining about having their balls broken. Audiences will be divided over whether this counts as respectful tribute or blatant rip-off, but a late cameo appearance seals the deal for the former with just the right amount of class. "Who's the master, the painter or the forger?", asks Rosenfeld about his collection of fake paintings; on this evidence, Scorsese is still the master, but Russell is comfortably forging his own path towards legendary status. If he has to steal along the way, it may as well be from the best.