Here is a list of things that has happened since the first American Pie was released in the summer of 1999:

- Jason Biggs has appeared in 12 non-American Pie-related films, which have earned less than half the total box-office of Pies 1-3.

- Tara Reid became a party girl and tabloid target after she had plastic surgery to put a giant mouth on her stomach.

- Chris Klein was subject to abject humiliation when his woefully out-of-tune audition tape for Mamma Mia! was leaked.

- Eddie Kaye Thomas appeared in Freddy Got Fingered and Dirty Love, which scored 11% and 4% respectively on Rotten Tomatoes.

- Natasha Lyonne was arrested for DUI, contracted hepatitis C and was publicly accused of molesting her neighbour's dog.

- Four dreadful American Pie sequels went straight to DVD. Eugene Levy was in all of them.

As you may have guessed from the title, the hoary old cliché of the school reunion is the reason the gang are all back in town. "Funny," says a forgettable female character in denim hotpants. "In some ways you guys have completely changed, but in others, you're exactly the same." Well, she's half right. And it's only half-funny. Jim, Kevin, Oz, Finch and Stifler are suffering from major arrested development - despite a few crows' feet and convenient character baggage (kid, job, fame), they're all still absolutely obsessed with sex. It's cute when high school and college kids lust after the ladies; it's significantly less lovable when adults are still at it.

Jim's problem is that he's not having enough sex with wife Michelle (Alyson Hannigan). Kevin's problem is that he thinks he wants to have sex with someone other than his wife (ex-girlfriend Tara Reid). Oz's problem is that his model girlfriend (Katrina Bowden) wants to have too much sex. Man, they really nailed our demographic! The idea is that the guys are all supposed to be older and wiser and facing problems of maturity (with the exception of Seann William Scott's party animal sadcase Stifler), but they're not. They're exactly the same one-dimensional characters as in '99. 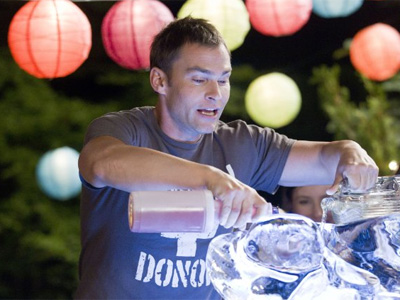 
This refusal to grow old gracefully does raise the occasional laugh, but when it tries to do heart, it fails miserably (Chris Klein gets to deliver an even less romantic chat up line than "Suck me, beautiful", only this time it's not intentionally awful). The most ludicrous situation comes just before the third act, when Jim delivers a crushing put-down to Stifler regarding his constant immaturity ("We're not in high school any more!") while still wearing a comedy leather gimp suit from an earlier scene. The movie doesn't even address this irony, preferring instead to play sad guitar music - shorthand for 'silence please, these characters are learning'. Any attempt to age the characters - like, say, giving Jim a kid - is inevitably used later on as a reason why they aren't getting laid.

True to form, almost every female character in the film, from ages 18 to 50, is portrayed as a slut or a sex-crazed nymph; those that aren't are either labelled prudes, have unflattering hobbies (being hooked on trash TV) or are lesbians. It's distracting and puerile - you can actually count down the time between a female character being introduced and when she announces her desire to get boned. Ladies, I feel offended on behalf of your gender. It's hard to concentrate on the comedy when the level of respect for the movie's girls is so low.

Which is a shame, because American Pie: Reunion IS funny in places. Seann William Scott's Stifler is amusing in small doses, even if we're being encouraged to laugh with his crudity and not at it (the sheer joy on his face while taking a shit in someone's cool-box is reason enough to justify his return). Chris Klein - such an underrated comedian - is great, and is blessed with the most interesting character quirk, namely quasi-fame as a sportscaster and contestant on Celebrity Dance-Off (basically an excuse to show off the sculpted bod). Jason Biggs is Jason Biggs being Jason Biggs: predictable and awkward but also endearing as always. 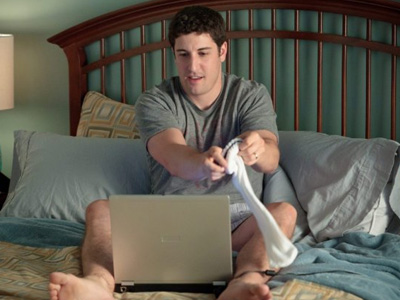 We've all done it, RIGHT GUYS?

Most of the movie's comedy is achieved through a shameless manipulation of nostalgia. EVERY character, no matter how minor (paging The Sherminator) pops up for their allotted cameo, some more successfully than others (Natasha Lyonne surely only appears so that there wasn't a great big hole in the middle of the movie's poster). After a while, the constant 90s throwbacks grind you down and you find yourself enjoying the movie despite itself, thanks in part to a soundtrack from the likes of Sum 41, who probably all have children and office jobs and bank loans and horrible, unexplained back pains by now.

Apart from the horrendous sexism, the movie's main problem is the insistence on building a narrative on phony, artificial drama, created purely out of convenience - the old 'easily-explained sexual misunderstanding' trope was old news in the 20th century. I found myself fantasising just how great it would be if Jim really DID cheat on his wife with the hot babysitter next door, ploughing her with the force of a thousand hurricanes while staring into the camera and saying, "Yeah, this is happening." But, alas, it wasn't to be. Anything to break the predictable status quo, the dramatic mediocrity of it all. That wholesome, all-American apple pie has long since been stirred with dick, so why are we still being asked to swallow it? 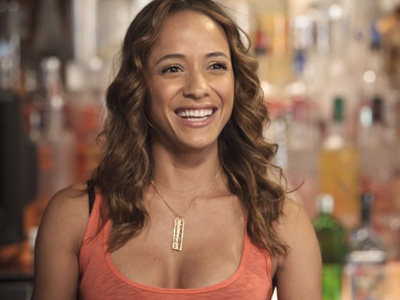 Stifler: "I got something you can swallow, ladies!" Audience: (*predictable groan*)


American Pie: Reunion does exactly what's expected of it, no more, no less - it's less a fresh slice of pie and more of a re-bake. It ends on a vague threat, with the gang promising to meet up "every year or so", which might stretch the movie's nostalgia factor to breaking point. In fact, it's the oldies, franchise stalwart Eugene Levy and Jennifer Coolidge, who provide the movie's funniest moments - one minute in their company is worth a hundred with the principle cast, proving that when it comes to maturity, the class of '99 still has a lot of growing up to do.

More:  American Pie Reunion  American Reunion  American Pie 4  American Pie  Seann William Scott  Jason Biggs
Follow us on Twitter @The_Shiznit for more fun features, film reviews and occasional commentary on what the best type of crisps are.
We are using Patreon to cover our hosting fees. So please consider chucking a few digital pennies our way by clicking on this link. Thanks!