Oh, great. This should help smooth things out. While I wouldn't support the action, I'm surprised to have heard no calls to postpone the release of American Sniper. Here's a portrait, entirely unshaded by grey, of a US Navy SEAL who claims more confirmed kills than any other sniper in US military history, all of them in Iraq. There are interesting questions about the morality of this, given how many more lives he likely saved, about the effect it had on him, and about the implications of American occupation in the Middle East. Clint Eastwood isn't terribly interested in asking them, though. While this is an effective and very watchable war movie, it's as uncomplicated as it gets.


Early on in Chris Kyle's (Bradley Cooper) first tour of Iraq, he is pulled in by a superior officer to be reprimanded for shooting at an unarmed target. The person was not carrying a weapon, he is told, but a Koran. "I don't know what a Koran looks like!" he argues, unrepentant. It's a simple explanation and the film doesn't question it. Complicating heroism isn't why we're here.

Kyle is the sort of American movie hero that seems anachronistic now, when cinema is mainly anti-war, or at the very least eager to stress the human cost. A John Wayne or - well - a Clint Eastwood; the sort who knows beyond doubt that his cause is righteous, and is backed up by a film that agrees. He signs up for the SEALs after watching a news report on the 1998 US Embassy bombings in Kenya and Tanzania. ("Look what they did to us...") His future wife asks him on first meeting why he signed up, and he responds, shutting down the friendly, teasing tone of the conversation so far: "Because this is the greatest country in the world and I'd give my life to defend it." 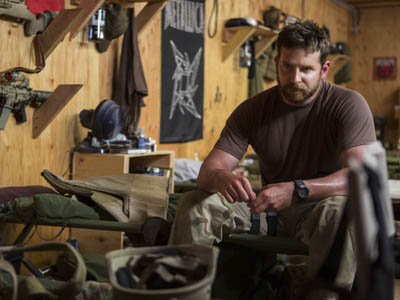 
This no doubt goes down differently in US theatres. If you've spent any time in America you'll have noticed that its people's relationship with nationhood differs to ours. Here an MP resigns from the front bench after tweeting an uncaptioned picture of a house festooned with St George's flags, because even pointing it out is supposed to connote snobbery at simple patriotism. An equivalent snap by a Congressman would've just got retweets and favourites: the idea that it was inspired by anything other than genuine pride at the sight wouldn't have been raised. Those flags are everywhere you go in America, and among them you begin to understand that it's a sincere, straightforward expression of an instinctive emotion.

Here, lines like this are more difficult to understand, and it's not helped by Eastwood's ignoring any question of whether Kyle and the US military should be in country or are doing any good. Every Iraqi you meet is a bad guy: a terrorist or an ally who later proves duplicitous. There is an insurgent sniper set up as Kyle's nemesis, and it's made implicit he's an inferior by a shot of how he positions his feet, which we know to be incorrect from an earlier SEAL training scene. The occasional flicker of doubt (Kyle's first kill is a woman: it's justified but he broods over it, saying it's not how he thought it would be) is soon overridden. He later works through what seems like PTSD by hanging out with some fellow vets back home and shooting some more guns.

None of its politics spoiled my enjoyment of American Sniper particularly: there's not a lot to fault about it as a war biopic. Kyle's wife Taya (Sienna Miller) wants him to stay home but he wants to be back on another tour, and that's where we want him, too. That's where the action is, and if we're not going to examine too closely how he deals with daily life back home (and we don't, despite what the official synopsis suggests), we might as well just follow him back to Ramadi and his rifle. Cooper is excellent: gruff, impenetrable, an unquestioning weapon of war. 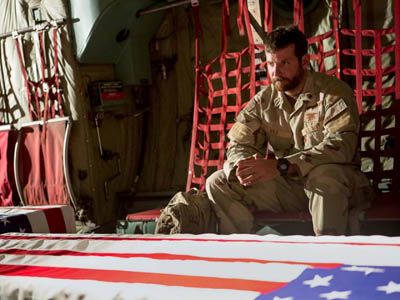 
But neither Kyle nor Eastwood wants to explore why he's killing people or how it affects him. Make no mistake, this is a pro-war film, and this is rare. Eastwood is a conservative filmmaker, his brand of masculinity always bringing with it a libertarian posture: do it yourself, protect what's yours and don't rely on anyone else. His view of war seems to work along similarly unmuddied lines: we're right, they're wrong, we've got to shoot some sense into them. Chris Kyle is in that regard like an extension of Eastwood, and indeed is a product of the American ideal of masculinity that Clint's acting persona helped construct. It's an exceptionally snug fit of filmmaker and subject.

There is a scene later on in which Kyle is greeted in a garage by a soldier whose life he once saved in Iraq. He's obviously uncomfortable at the man telling his son that his father's a hero. But it's not because he wants to forget the war. It's because he's compartmentalised his life and his moral code, and doesn't like it when his two lives intersect. The America he wants to protect is less dear to him than the act of shooting people to protect it. His ideology is essentially just violence, and the difference between him and his insurgent counterpart isn't so great as he'd like to believe.

More:  American Sniper  Clint Eastwood  Bradley Cooper  Sienna Miller  Jake McDorman  Luke Grimes  Kevin Lacz  Cory Hardrict  Eric Ladin
Follow us on Twitter @The_Shiznit for more fun features, film reviews and occasional commentary on what the best type of crisps are.
We are using Patreon to cover our hosting fees. So please consider chucking a few digital pennies our way by clicking on this link. Thanks!