Three young friends lark about with a video camera, filming themselves eating sweets and making private jokes like typical teenagers. They start to sing Happy Birthday to the girl holding the camera, but one voice stands out – a rich, soulful and mature voice completely at odds with the young face its coming out of, one that will be later compared to the likes of Billie Holiday and Ella Fitzgerald. It’s an astonishing opening to Asif Kapadia’s moving portrait of tragic singer Amy Winehouse, and it’s as sad as fuck.


It’s hard to know what new information you could possibly learn about Winehouse’s rise to fame and her downfall due to drugs and drinking given that there was a media scrum and Mail Online update every time she left her house. From her early days in the studio learning her craft to her sad final months, there was always a camera around – even when she was taking drugs in her home or the contemplative moments before she visits her incarcerated husband in prison.

Like Kapadia’s previous documentary Senna, Amy’s story is told in a chronological and almost forensic manner through archive material, home movies and paparazzi footage. Through such a great wealth of material, a few revelations actually come to light, all of which only make the tale even bleaker: her struggle over her dad leaving the family home when she was 9, her openness about her bulimia (which her mum admits she did nothing about) and her frustration that fame was inescapable. Winehouse was just a big bundle of problems in a tiny body and throughout you sense the infuriating fact that there was just never the right person around to help iron her out. 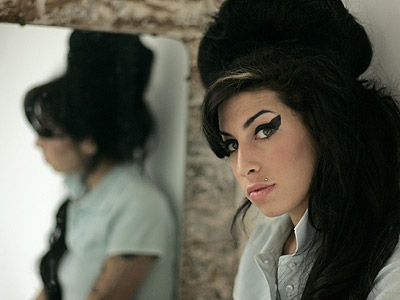 [It's really hard to know if this is a still from the film or just a random picture of her - Ed.]


Like Billie Holiday, Winehouse channelled her hurt and despair into her lyrics, neatly illustrated by Kapadia running them on screen to show how much they reflected what was going on in her life at the time. All of Amy’s demons were in plain sight for us all to see. If the graphics weren’t running over photos of a downcast Amy sitting with her guitar, or shots of her lyric book, it would almost make for a great karaoke session and serves to remind everyone that Back To Black is an amazing and complex album.

It’s not too hard to see why dad Mitch has publicly distanced himself from the film, coming across as a bit of a blundering idiot, wanting to be more of a shrewd svengali than a father. It’s never in any doubt that he loved his daughter, but in one heart-breaking and hard-to-watch moment, Amy’s closest friends reveal it was Mitch who insisted she fly out to Belgrade to do a gig when she could barely stand and was incoherent. In the few months before she died, when she apparently found peace in Saint Lucia, a father-daughter reunion is ruined by the fact that Mitch turns up with a documentary crew, prompting Amy to spit out “Make sure you’re nice to me on camera, dad.” We’re really left in no doubt who the villains are. 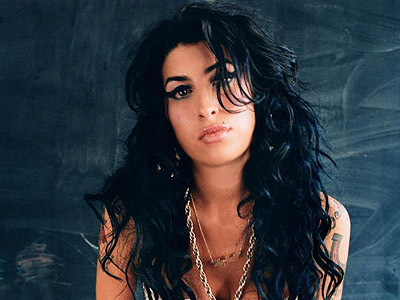 [Seriously. Is this bit in the film? There's only so much Google Images can tell me - Ed.]


Enter now the biggest and baddest of them all, husband Blake Fielder, a wannabe wide-boy from North London who went from handing out gig fliers to accompanying Amy to every interview and photo shoot, egregiously making her dependent on him for love and crucially, drugs. Whenever Blake shows up, disaster and sometimes overdoses follow. Maybe it was intentionally left out by the filmmakers, but Fielder rarely mentions love, just how mental they both were. In one home-footage scene, he plays up to the camera in a bar, making jokes about how he’s broke but Amy can pay for the champagne: it’s revealed that they’ve just got married that morning, and whilst he’s pouring out jugs of beer for his mates, Amy is seen sitting forlornly on her own at the bar, picking at what we assume is her wedding breakfast. Later, whilst Amy is rebuilding herself in Saint Lucia after their separation, a smug Fielder asks one interviewer: now he’s healthy and handsome, why does he need to bother with her anymore? It takes an incredible amount of strength not to boo and hiss whenever he pops up on screen.

Together, her inexperienced manager – who didn’t know how to reign in Amy’s reckless rock and roll lifestyle – Blake, Mitch and, to a certain extent, Amy’s mum as well, all seem unable to come to terms with the hand they had in her downfall, citing that Amy’s strength of character made her unwilling to change while giving a chorus of “there’s only so much we could do”. Kapadia’s light touch however does allow you to draw your own conclusions; Amy was an adult after all and able to make her own decisions. At a Grammy party where a then-clean Winehouse celebrates a great win, she takes a friend aside to tell them how boring it all is without drugs. The greatest sadness underpinning everything was Amy’s own complicity in her demise. 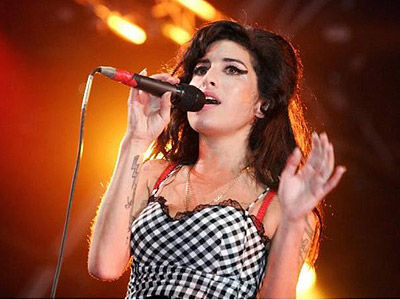 
We know that there’s not a happy ending, and at times the film’s in danger of drifting into mawkishness, with halting, teary voices speaking over slowed-down footage or candid stills of Amy looking into the middle-distance. Antonio Pinto’s haunting score really does hit you in the feels, each ringing piano note tightening that knot in your throat. Emotions run high all the way throughout: the occasional glimpses of the witty and spiky character Amy was show what made her so intriguing, with Kapadia including a great interview of Amy rolling her eyes when a journalist starts to compare her to Dido. It’s the moments between the PR disasters, when the singer is forced to get clean and she’s sparkling and focused that are truly heartbreaking, showing what Winehouse was capable of when she wasn’t getting wrecked.

There is a strong feeling that the path that Amy went down was almost inevitable, through the pressures of fame and the predatory stalking by the media. The film will leave you feeling exhausted – it’s vibrant, haunting and, I’ve probably overused it, but also overwhelmingly sad. It’s steeped in a grief that will stay with you for a while after; perhaps somewhat inappropriately it will also leave you wanting a very big drink.

More:  Amy  Amy Winehouse  Asif Kapadia
Follow us on Twitter @The_Shiznit for more fun features, film reviews and occasional commentary on what the best type of crisps are.
We are using Patreon to cover our hosting fees. So please consider chucking a few digital pennies our way by clicking on this link. Thanks!