Ladies and gentleman, it's time for ... The Fred West Show! And here's your host: Mr Doooooooooooominic WEST!

When I first found out that Dominic West was going to play Fred West for ITV, it seemed an idea far too comical to stick. And so it proved at times: as good as his performance turned out to be, it was actually pretty funny in places.

Not mega-LOLs funny, you understand: at no point does Fred say "We're onto a winner here, Trig" before falling through a bar, but Dominic West came up against the challenge of playing a serial killer who was outwardly quite an affable chap, and so ran the risk of making him too likeable. The solution he came up with seemed at times to involve overtly playing it for laughs. 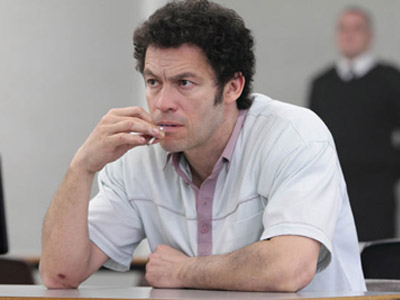 Which means I'll probably have to put my Harold Shipman sitcom on ice for the time being.

The Westcountry accent didn't help matters, but then you can't much blame him for that: it's a pleasant burr but one guaranteed to remove gravity from any given situation. Noted Bristolian and Darth Vader actor David Prowse came to my school as the Green Cross Code Man when I was a kid. Having heard the man speak in person, I can confirm that, had they not overdubbed his voice with James Earl Jones's, the Rebel Alliance probably wouldn't have taken him as much of a serious threat.

Credit, though, to the makers of Appropriate Adult for avoiding the temptation to show any of the Wests' crimes: this drama tells the story of the investigation and Rose West's eventual trial, picking up at Fred's first interview. With a suspect in custody who had learning difficulties, police brought in Janet Leach (here played by Emily Watson), the civilian appropriate adult, to ensure there was no chance West could misunderstand the charges.

For all the unintentional comedy in Dominic West's performance, it was a good one overall, but it's Watson who deserves the real plaudits here. The amount of emotion she can convey in close-ups (which everyone who directs her uses a lot, I've noticed) is staggering at times. 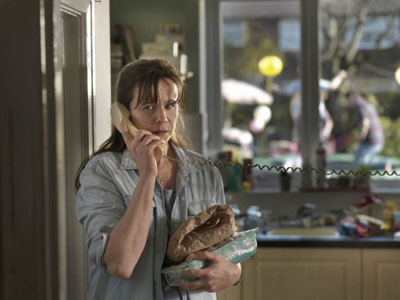 "I've told you before, Mr Tarrant, I won't be Fred's phone-a-friend."

Once Leach's official involvement in the case is over, she continues to visit West in prison, claiming that she has earned his trust and can use it to get him to confess to further crimes. It's obvious that she's our 'eyes' - the character who sees things from an observer's perspective and reacts appropriately - but there's more going on here. She's curious, and perhaps even a little titillated by the things she hears, but she recognises it and hates herself for it. In a way she personifies the public's fascination with serial murderers and cases as high-profile as the Cromwell Street killings. We're horrified by them, yes, but fascinated too, and we want to hear more - preferably with as much grisly detail as possible.

Monica Dolan too deserves a mention: the Rose West role is not a major one in terms of dialogue - she mainly just spits venomous insults at anyone within a ten-foot radius - but she manages to exude an intense veneer of menace, staring blankly yet threateningly through her Deirdre Barlow specs, and scaring the shit out of me in the process.

This was a high-profile and controversial TV project. I suggested when we first reported this that it would most likely be cheap and exploitative, but the makers did an admirable job with the sensitive subject matter. ITV, for once, actually got something right.

More:  Appropriate Adult  Dominic West  Emily Watson  ITV
Follow us on Twitter @The_Shiznit for more fun features, film reviews and occasional commentary on what the best type of crisps are.
We are using Patreon to cover our hosting fees. So please consider chucking a few digital pennies our way by clicking on this link. Thanks!