I know most words. But 'arbitrage'? Right, like that's a word. Unless we've started speaking French all of a sudden. It is a film, though - or more accurately, two films. One of them is about a cop investigating some stuff and is fairly good. The other is about a bunch of guys in offices talking about spreadsheets, and is just as interesting as seeing that in real life.


It came as some surprise to me when putting this together that we have no other Richard Gere-related content on this website. Go on, click his name. This got me thinking: does anyone actually like Richard Gere? There was a time when he was a massive star, but danged if I can think of anything much he ever did to propel himself to that status. There is, of course, a healthy chance that my memory is more at fault than his career. 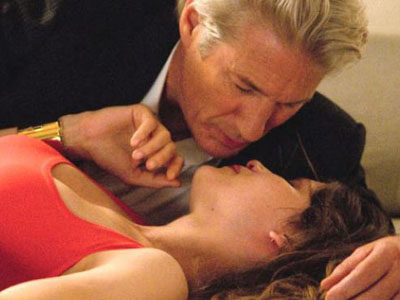 "I was macking chicks hotter than you while you were still in grade school, baby."

Arbitrage has been widely heralded as a return to form for a star who's concentrated more on his philanthropic work of late. He does a fairly good job of it, too, but he's often swamped by the parts of the script preoccupied with the language of high finance.

This is where we come in: Gere's Robert Miller is a wealthy CEO and douche, who's in the middle of trying to sell his company. He's committing fraud in order to help the deal along by borrowing a few million to put in the account while the buyers are looking at the books. (You'd think even the most basic due diligence, let alone the kind undertaken by a multinational corporation before a buyout, would uncover this in a matter of seconds, but apparently not.) He's also cheating on his wife, until he's in a car crash which kills his mistress and he decides to cover it up.

This point about due diligence might reveal my ignorance about the world of high finance, but it's significant in its own right: as a cinemagoer of at least average intelligence, I don't know what anyone's talking about half the time, and Arbitrage doesn't make a lot of effort to clue me in. Compare this to recent films about business and finance - say, Margin Call or The Company Men - and you notice that they were careful enough to focus on the human interest behind the balance sheet, so you didn't drown in numbers. All Arbitrage has given you beyond the money so far is the fate of a guy it's set up as a total dick. 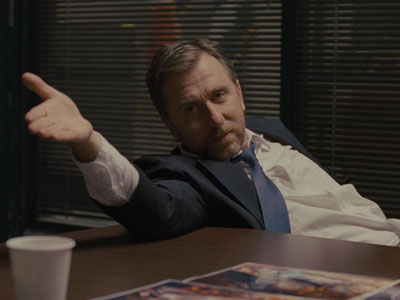 Then suddenly, Tim Roth comes along, as NYPD Detective Bryer, investigating the woman's death. Once we're in familiar territory - interview rooms, the dogged detective's conviction of the rich guy's guilt, subtext-laden interrogations - the whole thing comes alive. I don't speak finance, but I speak cop, and it's like somebody just switched the language track. Roth's terrible New York accent aside, he's the perfect counterpoint to Miller's white-collar stonewalling: always leaning on something, slouching in his chair, his clothes ruffled. Their first encounter in Miller's office is an expert little dance of egos and lies.

It's not really enough, though: as Miller unravels, Gere doesn't quite do the job of making him fall apart with sufficient conviction, and the more time is devoted to whether or not the buyout's going through, the more you want Roth to turn up and rough it all up a bit.

So what does it actually mean, 'arbitrage'? Well, apparently it's 'the purchase of securities on one market for immediate resale on another market in order to profit from a price discrepancy'. Could ... could you at least say that while flashing your shield and drinking a cup of coffee? No? Ah, forget it, then.

More:  Arbitrage  Richard Gere  Susan Sarandon  Tim Roth  Nicholas Jarecki
Follow us on Twitter @The_Shiznit for more fun features, film reviews and occasional commentary on what the best type of crisps are.
We are using Patreon to cover our hosting fees. So please consider chucking a few digital pennies our way by clicking on this link. Thanks!