Before I Go To Sleep

At one point during Before I Go to Sleep, I convinced myself that I too had anterograde amnesia; like Nicole Kidman's character Christine, sometimes my mind would wipe the previous day's events from my brain. However, I quickly realised the link between my memory loss and how many whisky cocktails I'd consumed the night before (hashtag legend) and so, panic over. Much like a whisky-induced hangover though, Before I Go to Sleep will also make you struggle to fill in the blanks with an increasing sense of dread. Hopefully with a bit less sick.


Based on S.J Watson's 2011 best-selling debut novel, Kidman plays Christine Lucas, an amnesiac living in an unspecified part of London with her husband Ben (Colin Firth). Every day when she wakes, Ben must explain to confused Christine that she is unable to form new memories due to a horrific accident and that her mind resets itself every time she goes to sleep. Every morning, he must fill her in on a twenty year gap in her memory via photographs and post-it notes in the bathroom (whereas I just have two ibuprofen and a quick flick through Facebook to piece together the night before).

After Ben sets off to work, Christine receives a daily phone call from Dr Nash (Mark Strong), who informs her they have been having secret sessions behind her husband's back and directs her to her secret video diary. Very quickly, we discover not all is as it seems as Christine's fractured mind starts to wonder what really happened and why has Ben been seemingly been withholding information from her? 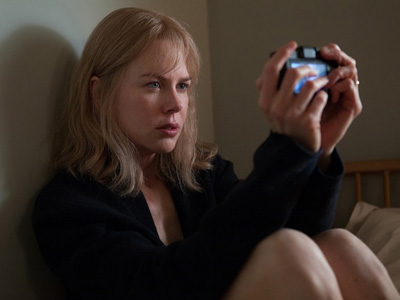 
Unfortunately I managed to ruin the huge twist of Before I Go To Sleep for myself by reading the book when it first came out (hashtag humblebrag). As with any adaptation, there will always be niggles for those familiar with the source material depending on what the movie decides to leave out. S.J Watson's novel is a densely layered page-turner exploring complex themes of memory and identity, and Rowan Joffe does an admirable job of trying to condense all that grey matter onto the screen.

Certain aspects have had to be jettisoned, however; Christine's narrative voice, told through her journal in the book, is swapped for her more visual and cinema-friendly video diary, which makes the screenplay little more than a precis of the book. What this does mean is that Joffe has to keep the plot brisk and taut and focused on events rather than 'Who are we if we can't remember who we are?' But anyway, if I wanted to get bogged down in a 'Book vs Film' debate I would start a blog about why Edward's hair was the wrong colour in Twilight. [Please do not do this - Ali]

Maybe it's because I was anticipating every plot twist that I could forgive all the suspense clichés Joffe uses again and again - meetings in underground car parks, lots of travelling through tunnels and close ups of doorknobs turning - but what sets it above a typical adapted-for-TV thriller is its undeniably starry cast and stylish muted tones. 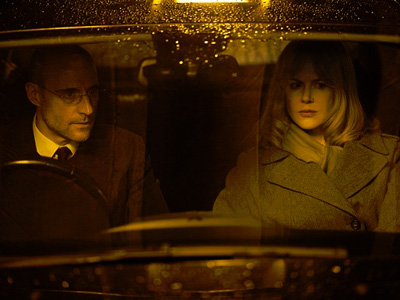 "Fuck's sake Mark, the light is amber. YOU CAN GO."


Kidman is on perfect twitchy form opposite a subtly creepy Firth, who could just as easily turn out to be the hero or the villain and has left Mr Darcy a long way behind. Everything is shot in a very fashionable slate-grey to rival the most noir of Nordic thrillers, adding just the right level of creepiness, and special mention must also go to Ed Shearman's jumpy score, channelling Thomas Newman in the best way possible to swell and give you shivers at the right point.

There are a lot of decent jolts and pregnant pauses that build to an unexpectedly emotional ending – there won't be that much new if you've read the book, but it's still an intriguing premise all the same.

More:  Before I Go To Sleep  Rowan Joffe  Nicole Kidman  Colin Firth  Mark Strong
Follow us on Twitter @The_Shiznit for more fun features, film reviews and occasional commentary on what the best type of crisps are.
We are using Patreon to cover our hosting fees. So please consider chucking a few digital pennies our way by clicking on this link. Thanks!