"Too much of a good thing can be wonderful", claims Michael Douglas as Liberace in this bling-soaked biopic, and while recent developments suggest that he might want to qualify that statement by suggesting one at least goes easy on the knicker bacon sandwiches, he could still very well be referring to his own performance. His performance in the film, I mean, not between the folds of Catherine Zeta Jones' funflaps. Honestly, you people.


Leaving the Welsh valleys behind, Douglas is phenomenal as Władziu Valentino "Lee" Liberace, the deliciously flamboyant pianist, showman and (spoiler alert) closet homosexual who spent his career dressing up like a rhinestone-studded circus tent and entertaining audiences as only he knew how. Steven Soderbergh's final film focuses on Liberace's relationship with Scott Thorson (Matt Damon in tiny, sequinned pants), which means Douglas gets to play the man rather than the myth (although the lines are deliberately blurred), and it's impossible to take your eyes off him. 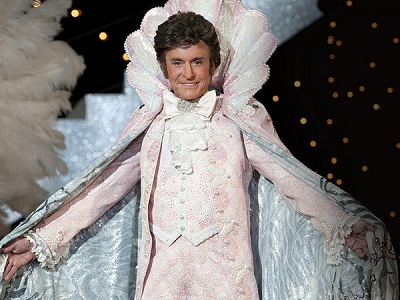 Not literally, that would be massively inconvenient.


Like the man himself, Douglas' portrayal hits all the right notes. He never veers into excessive campery, nor does he come across as a sexual predator, though in lesser hands than his and Soderbergh's this Liberace could easily have become a crude caricature. Liberace's life both on stage and off was all about putting on a show, and Douglas' skill here lies in making sure we never know if we're seeing the "real" Liberace, or even if such a thing existed.

That's also down to the writing: Behind The Candelabra is adapted from Thorson's memoir, so it's through Matt Damon's floppy fringe that we see, and try to understand, Liberace. Damon, too, is extraordinary: from innocent, wide-eyed fan to coke-addled, jilted lover, his performance is the minor key to Douglas' major chords. 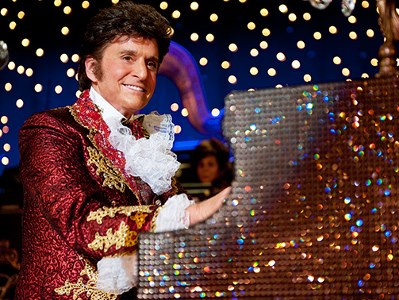 Liberace was delighted with the reviewer's terribly clever musical references.


There's glorious support too from Dan Aykroyd in a series of spectacular spectacles as Liberace's manager, and Rob Lowe's hilarious turn as a plastic surgeon who's done a little too much self-improvement is so good that Soderbergh waits just a little longer than expected before cutting away from him in order to wring out as many Lowelols as possible. In fact with all the acting talent on display here, Behind The Candelabra would be a pearl-encrusted shoe-in at next year's Oscars, were it not for the fact that its stateside premiere on HBO renders it ineligible for the Academy Awards. Somebody who'll suffer even more from this unfortunate state of affairs is costume designer Ellen Mirojnick; every feather, every ginormous collar, every polyester suit is hideously beautiful, and Soderbergh shoots Liberace's stage costumes as if they're the stars - which, of course, they are.

Technically, then, Behind The Candelabra is practically flawless. Its story, meanwhile, unfolds with equal skill, although it holds few surprises. It's the life and death of a love affair, and as such rolls out fairly predictably with all the beats you'd expect. Fortunately it's a love affair between two men, one of whom is a global superstar who wears 16-foot-long fox-fur capes which require their own Rolls Royce to transport, so that, at least, is fairly novel. There are timely hints at the legal implications of gay marriage too, although the script isn't really interested in getting into a lengthy debate about that.

Playful and respectful, Behind The Candelabra is bravura filmmaking from a director bowing out of his game while at the top of it, and from two leads whose performances deserve much more praise than the standard plaudits heterosexual A-listers receive when they dare to kiss people of the same sex on screen. It's a touching and bizarre love story which tactfully avoids all the pitfalls its subject matter potentially creates with remarkably good taste. And it's got Matt Damon in tiny, sequinned pants. What's not to like?

More:  Behind The Candelabra  Steven Soderbergh  Michael Douglas  Matt Damon  Rob Lowe  Dan Aykroyd  Scott Bakula
Follow us on Twitter @The_Shiznit for more fun features, film reviews and occasional commentary on what the best type of crisps are.
We are using Patreon to cover our hosting fees. So please consider chucking a few digital pennies our way by clicking on this link. Thanks!