If you want an example of how our relationship with technology has accelerated at a terrifying rate, show a young millennial the first Toy Story movie, which turns 20 years old this year. Made in 1995, the first fully CG-animated movie was a cinematic landmark yet it was still, tellingly, a tale of simple toys and derring do. That millennial you roped in (I won't asked questions how) will now look at Toy Story and turn their nose up at the relatively rudimentary visuals; they're much more likely to get their kicks from a movie like Big Hero 6, a breathlessly exciting, migraine-inducingly busy animation that must have surely pushed the Disney render farms to meltdown. Purely from a technological standpoint, it makes Toy Story look like a Punch & Judy show.


Big Hero 6 is a looker, overwhelmingly so: like a supermodel you can't help but stare at when she enters the room, the first ever Disney/Marvel co-production is distractingly beautiful - almost to its detriment. For while the story touches on some genuinely heartfelt emotions - as a lesson in grieving for tweenagers, it shits all over Bambi - the whizz-bang visuals and slick camerawork leaves you breathless. It's a movie you want to rewind, pause, zoom and expand; a dense, bustling cinematic world that's every bit as alive as that of Blade Runner. Big Hero 6 is next-level beautiful: a movie tailor-made to play on screens the size of houses. 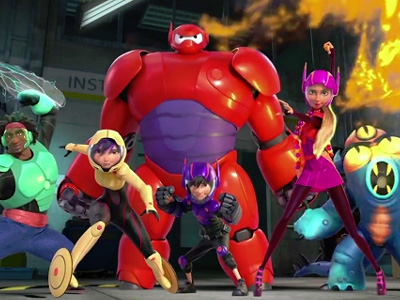 ALL OF THE COLOURS.


The centre of the world, and of the movie, is Baymax - a creation so delightful even the most cynical Disney retail marketing executive couldn't have dreamed him up. Baymax sells himself. The design is brilliant: he's an airbag with a conscience. 30 Rock's Scott Adsit gives a spot-on vocal performance to bring him to life, while Disney's animators have blessed him with a Weeble-esque low centre of gravity, so even simple scenes of walking or running contain moments of pitch perfect physical comedy. You will love him more than you love members of your own family; I would trample on everyone I've ever cared for to own him (although as a healthcare robot, Baymax probably wouldn't approve).

Baymax provides a cushion of levity, which is just as well, because Big Hero 6 is dark, even for Disney - a company who think nothing of slaughtering parents and orphaning children willy-nilly. Young Hiro goes through the wringer before the opening act is up; the formation of the titular superhero team - through a mutual love of science, instead of the usual god-given mutations - is an illustration for his need for family. There is real danger here, real things at stake; it's a movie driven by tangled and often misguided emotion. Big Hero 6 works hard to make you care then pushes that connection you've made. Even the villain, as predictable as he is, has a back story that's grounded in feeling instead of inherent evil. 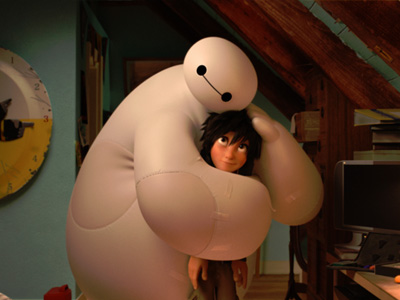 
It's a movie as smart as it is sweet. The script by Jordan Roberts, Daniel Gerson and Robert L. Baird has a knowing edge, ribbing the conventions of superhero origin stories via the character of super-fan Fred (voiced by the excellent TJ Miller). It's a film that treasures the human mind and celebrates brains over brawn. Even in the third act, when scenes of teamwork and believing in yourself become choking hazards, the script zeroes in on a boy and his bot - Asimov-esque themes of man's relationship with machine are smuggled into a colourful kiddy movie. There's passion here in every line of dialogue, code and music.

Yes, it's a movie that should probably come packaged with aspirins for adults: being whisked around San Fransokyo in pin-sharp 3D is as exhausting as it is exhilarating. There's much to be said in favour of films that take their time to tell a story slowly, using words instead of action, but Big Hero 6 feels like an animation in step with an ever-changing world - one that will one day be inherited by the infants who think in fast-forward and are currently wiping their sticky fingers all over our iPads.

More:  Big Hero 6  Disney  Superheroes  Don Hall  Chris Williams  Ryan Potter  Scott Adsit  Daniel Henney  Jamie Chung
Follow us on Twitter @The_Shiznit for more fun features, film reviews and occasional commentary on what the best type of crisps are.
We are using Patreon to cover our hosting fees. So please consider chucking a few digital pennies our way by clicking on this link. Thanks!