If I were a pretentious Film Studies student, I would discuss Birdman's importance at great length to anybody within earshot. I would write an entire thesis about the many ways in which it deconstructs the cinematic form and then I would go to parties and bore people with smug declarations like "Birdman is the best superhero movie ever made", proudly enjoying my own unique, daring perspective on the genre. Sadly, I am not a pretentious Film Studies student. I am, however, a pretentious film reviewer, so I still get to do all of those things and I don't even have to worry about getting graded afterwards. [B- for that intro - Ed]


Either way, Birdman Or The Unexpected Virtue Of Ignorance warrants extensive discussion. In every aspect, at every turn, it questions its own medium, rewriting the rules of how a film should behave. Whether it's the knowing casting of former-superhero, comeback-hopeful actor Keaton playing former-superhero, comeback-hopeful actor Riggan, the whole movie playing out as one continuous shot or even a quick, unexpected reveal of the Jazz percussive soundtrack being played live in the background for no discernible reason, this film doesn't just blur the line between fiction and reality, it breathes new life into the most basic and fundamental of cinematic formulae.

At the same time, it explores the purpose of film itself, contemplating the value of the 'fake' mainstream versus 'real' artistry. Riggan is dogged by his decades-old, most memorable role as costumed crime-fighter Birdman and tries to salvage his career - as well as his dignity - by directing and starring in a stage production of Raymond Carver's What We Talk About When We Talk About Love. In the process, the film goes to great lengths in condemning the saturated market of comic-book movies (even going so far as to mock Robert Downey Jr's "tin-man get-up") in contrast to Riggan's own need to be recognised for artistic integrity. 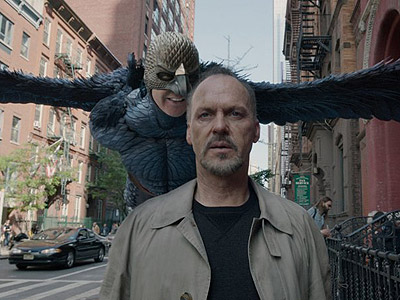 If all comic-book actors have this going on, pity poor Eric Bana.


But it's not as simple as "creativity good, corporations greedy". Riggan's need for approval is narcissistic, his behaviour is often abhorrent. This film poses the question rather than provides an answer: what is artistic value? Does it lie in short, attention-grabbing entertainment, or in challenging, thought-provoking concepts? It wants its audience to choose for itself - literally offering both options as its title.

All these thematic offerings are engaging in themselves, but Iñárritu's real masterful stroke here is in matching his technique to the story's central ideas with painstaking effort. In his depiction of a story that plays out over weeks as though it were all one long real-time take, the director presents yet another artistic dichotomy: mind-boggling planning and precision must have gone into making the seamless camerawork feel rough and loose and, as a result, this film foregoes traditional time-lapse cues and feels more alive. In short, Birdman plays out less like a film at all and more like Riggan's own medium of choice: theatre.

There's enormous credit due here to DP Emmanuel Lubezki, who intimately tracks Riggan through every door and corridor both on- and back-stage with the kind of all-access fluidity that he put to dizzying use in Gravity. And then there's editors Douglas Crise and Stephen Mirrione who have so flawlessly woven together each shot into one supposed take that you won't even think to look for the joins - they simply don't exist. 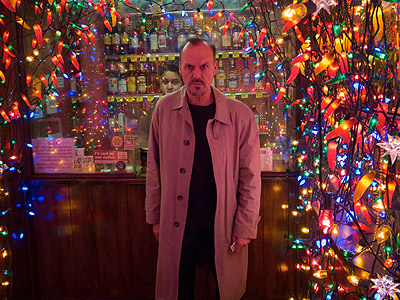 This one shot is a combination of eight takes filmed over three months. Probably.


Of course, for all the film's technical and conceptual achievements, its success rests squarely with Keaton who puts in the kind of performance on which he could happily retire. Just as it is impossible to imagine how the film could exist without his casting in the lead role, so intrinsically linked to his character as he is, it is also hard to see how another actor could have given a better portrayal of such a progressively manic psyche on the verge of collapse, desperately trying to hold things together for the sake of his own vanity. It's an unglamorous role with age and angst providing the extra-ordinary counterbalance to Birdman's occasional fantasy sequences and literal flights of fancy, and Keaton embodies the role, stomach paunch and all.

Meanwhile, the supporting cast rise to match Keaton's performance. While Zach Galifianakis gives an unusually reserved turn as Riggan's friend and producer, Emma Stone plays Riggan's wickedly down-to-Earth, fresh out of rehab, daughter-cum-PA with a grit and dispassion that we have never seen from her before.

And then there's Ed Norton, who enjoys his own character send-up. As celebrated method actor Mike, Norton pokes fun at his own history of rewriting his lines, insisting that everything - booze and sex and all - be done for real on stage. But this caricature of a douchey controlling actor gives way to layers and nuance. There is a moment in this film of pure chaotic fantasy that could easily top a best scenes of 2015 list, but it's to Norton's credit that the next most memorable moments are his scenes of quiet reflection on the theatre rooftop with Emma Stone. 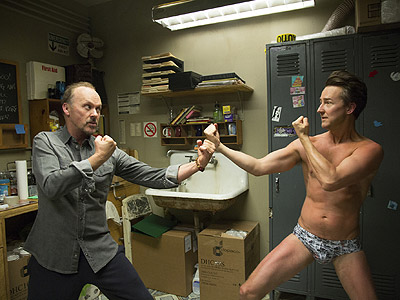 Even if it's hard to concentrate on them after seeing him like this.


The result of all of this, in case you are left in any doubt, is that Birdman is an astonishing accomplishment in every way. It's brilliantly inventive; it's a comedy that explores deep-rooted issues of identity, integrity and legacy; it's a commentary on superhero films in which the real-life protagonist displays actual superpowers; it's an intimate study with cosmic results; it's playfully judgmental, existential and meta-textual.

Is Birdman "the best superhero ever made"? If the genre can be scoped that wide then quite possibly. What's more, just one day in and we already have the best movie of 2015. I say that with utter confidence. I mean, I haven't looked at the schedule for the upcoming year but there's probably not much else coming out, right?

More:  Birdman  Alejandro G Irritu  Michael Keaton  Zach Galifianakis  Edward Norton  Emma Stone
Follow us on Twitter @The_Shiznit for more fun features, film reviews and occasional commentary on what the best type of crisps are.
We are using Patreon to cover our hosting fees. So please consider chucking a few digital pennies our way by clicking on this link. Thanks!