How to describe Black Swan? Ballet-based lesbionic headfuck just about does it - there certainly aren't too many pigeon holes you can bash this particular peg into. Though it touches on a number of genres and encapsulates several themes, Black Swan is best viewed as a horror movie - a slow creep into insanity that's touching and terrifying in equal measure.

Black Swan is The Natalie Portman Show: a shop window for one of the most talented actresses in Hollywood. She plays Nina Sayers, a porcelain ballerina whose fragility is down in no small part to her overbearing mother, Erica (Barbara Hershey). To play the lead in her company's production of Swan Lake, Nina must embrace her Black Swan - the sinister yin to her white and fluffy yang. Pummelled under the barbaric tutelage of her director Tomas (Vincent Cassell) and led astray by competitor Lily (Mila Kunis), Nina begins a inexorable descent into madness.

Obvious alert: Natalie Portman is phenomenal - it's a virtuoso performance of hard graft. The parallels between Darren Aronofsky's narrative and that of Swan Lake are hardly subtle - in fact, they're frequently mentioned - but it's a role that puts her through the wringer; one that requires lightness of touch and wells of inner turmoil to draw from. 2011 may be the year you get sick of Natalie Portman (she may have as many as seven films released before the summer) but Black Swan will be the one you remember. Or maybe Thor. Probably Black Swan. But maybe No Strings Attached. No, definitely Black Swan. 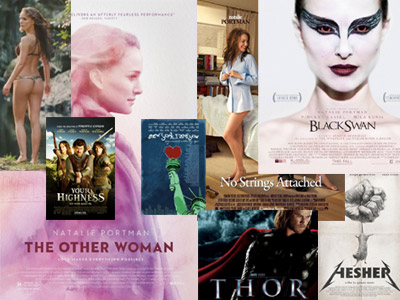 What do you mean, 'over-exposed'?

Aronofsky serves his leading lady well, propelling her through a nightmarish journey and surrounding her with all manner of ghouls, wretches and damned souls. Kunis, representing Nina's dark side, doesn't have as demanding a role as Portman, but she's solid support and plays her part well - she's Nina's Tyler Durden and careens through the movie with the same carefree cackle. Vincent Cassell brings the same swinging dick Euro-swagger he always does, sleazing up the joint and shagging everything that moves. Tsk, the French.

There's a general feeling of pervasive unease that lies beneath Black Swan's ruffled feathers that has you on edge even in the slower scenes. Nina has a literal dark side - a smouldering alter-ego of whom you only catch frightening, stolen glimpses. Every set is covered in mirrors, giving a true sense that there is nowhere for Nina to hide. (I could be wrong, but it looked to me like all the mirror reflections were slightly off, like they'd been shot separately.) Clint Mansell's score gnaws away at the nervous system. 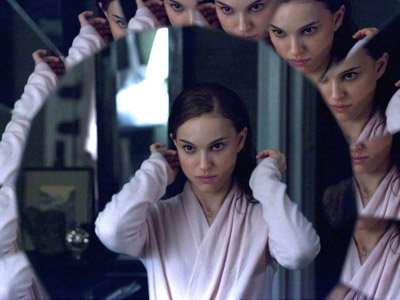 It's called symbolism, jerkbag. Look it up.

Black Swan is a movie that's constantly on a knife-edge and that's down to Aronofsky's masterful composition, impeccable framing and stunning use of shadow and light. The scares never feel cheap and the shocks last longer than most - the final half hour is a queasy cocktail of psychological torture and Cronenberg-esque body horror. There are hints of self-harming, schizophrenia, homicidal tendencies and even incest. In short, it's fucking creepy - some of the more disturbing images will linger for days.

It's a wonder I'm surprised. Aronofsky has shown time and time again that he can deliver an unforgettable experience, no matter how bizarre the source material sounds and whatever the genre. Black Swan could be his best movie yet; a fascinating portrait of obsession and the price of pursuing perfection. And yes, you're now officially allowed to be excited about Wolverine 2. It'll probably scare the shit out of you.

More:  Black Swan  Natalie Portman  Darren Aronofsky  Vincent Cassell  Mila Kunis
Follow us on Twitter @The_Shiznit for more fun features, film reviews and occasional commentary on what the best type of crisps are.
We are using Patreon to cover our hosting fees. So please consider chucking a few digital pennies our way by clicking on this link. Thanks!